Scene: Our apartment in Ashkelon, Israel.

My wife, Karen, and I are sitting at the breakfast table. There is a stony silence. Karen’s face makes Putin look warm and cuddly by comparison.

Me: What’s the matter? If it’s the burnt bagels, I can go out and get some more.

K: No, it’s not that. It’s your performance.

Oh, dear. I wasn’t expecting that. But maybe she has a point. I’m not as young as I used to be.

Me: Shall I ask the doctor if he can proscribe Viagra or something?

K: Not that kind of performance. Your performance as manager of Hapoel Ashkelon FC.

Me: What do you mean? I kept them up.

K: Kept them up just! 12th out of 15. Safety guaranteed only in the penultimate game.

Me: That’s all the board wanted. They’re not complaining.

K: Not yet, but the club’s going backwards under you. And the fans are saying you’re rubbish.

K: You should have dropped them.

Me: I’ve got rid of them, haven’t I? We’ve offloaded Reynoso on a free and I haven’t extended Banin’s loan.

Jeesh. I call that a two-footed challenge. The fact she’s right doesn’t excuse it.

Me: Er, I think I’ll spend the morning at the club. I have some, er, paperwork to do.

I’m going to call one of the non-Muslim members of my backroom staff and see if they fancy a beer.

Later, sitting at the desk in my office and playing with our scouting database, I located Karen: 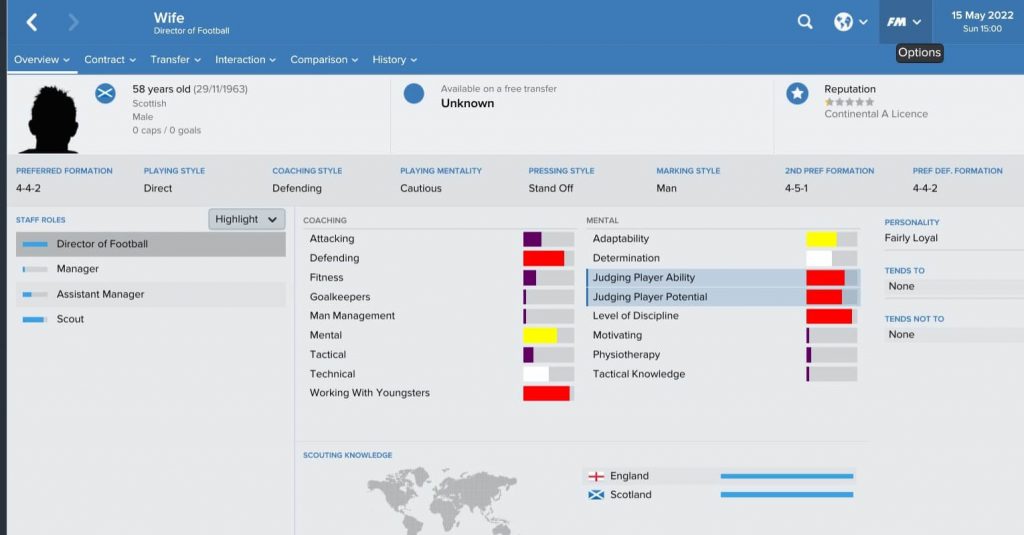 Judging ability: high. Discipline: strong, but there’s such a thing as too strong you know. Especially at breakfast. And the motivation and man management leave a lot to be desired.