Board in the USA 6: Book-Balancing and the Superdraft

After the tumultous time in the Expansion Draft, our hero now faces a new trial, the Superdraft. Little does he know that he will be faced with his toughest enemy yet… accounting.

After my expansion picks, I decided to check the books to see how much cap room I had left. 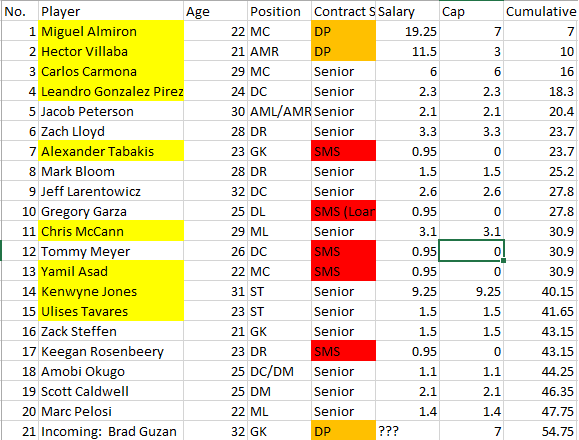 So it looks like the squad is shaping up reasonably well! I obviously still had a bunch of idiots lying around that I had not included, but they were mostly on Senior Minimum Salary contracts. If I were to pick up players in the Superdraft that I liked better, I would drop the existing buggers in a heartbeat.

The Superdraft is a yearly event on the 14 January, when teams draft upcoming young talent from the college scene. They tend to be older than the average regen, coming in from 18-23 years old. The pick order is the reverse of how the teams performed in the prior season of MLS – so the first place team would have the last pick, and so on. Being Atlanta United, we would have the 2nd pick of every round of drafting.

On the 20th of December, the players were revealed. Exciting times, lads! 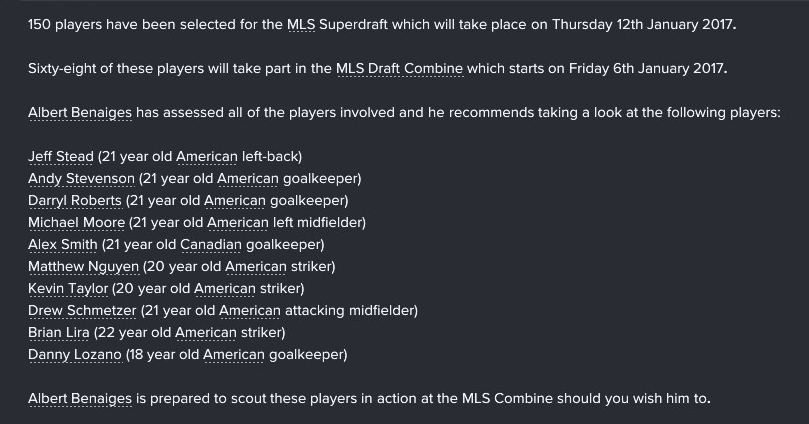 After some preliminary scouting, I realised… it’s a pretty weak draft. Not many of these 20-22 year olds can fit immediately into my roster. The only pickable players will be taken in the first round, and none of them are particularly transcendent. More importantly, all of the pickable players are attacking players. I still want one more central defender, so this draft is not going to be the solution.

After all my earlier deals, I was stuck with many many picks in this not-very-strong draft. I already had 3 or 4 17 year olds with high potential ability sitting around, so taking 6 new young players would not be prudent for the squad. 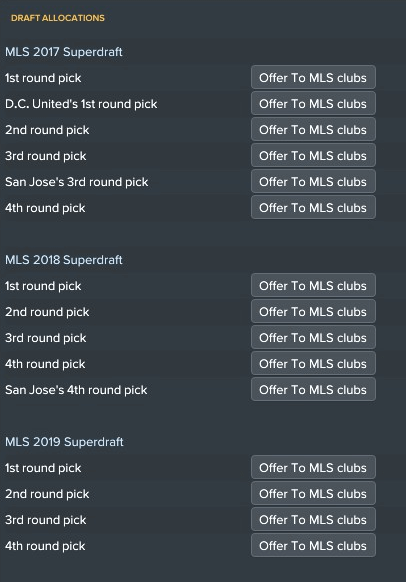 I needed a way to dump some of these late picks. But how?

Cue London Woodberry. Man, that is an awesome name.

After an enquiry, I was delighted to hear that all New England Revolutipon wanted in return was a few picks in the upcoming draft. While he isn’t spectacular, he’s on a cheap contract, and better than the free agent I signed in 2016, Tommy Meyer. If I need squad space I can cut Meyer in March. If not, I can keep both of them and maintain good coverage for my defence.

I tried my luck and proposed the following: 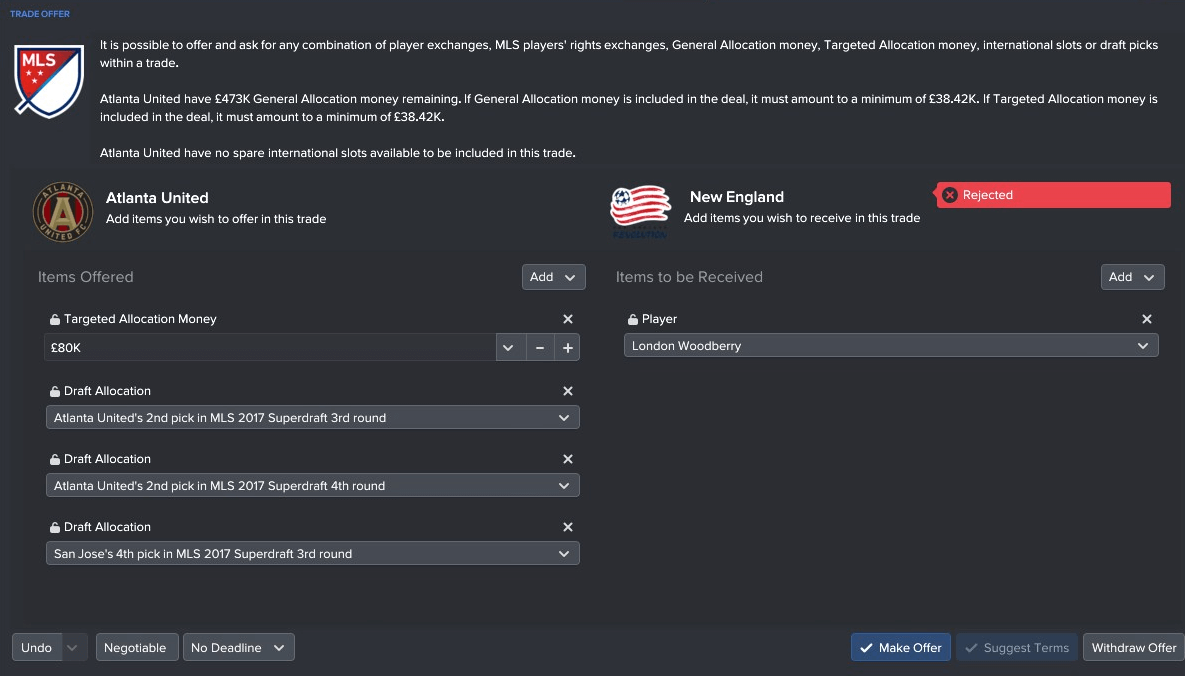 Unfortunately New England were not having it. I had to settle for trading away DC United’s first round pick in place of my the 4th round pick I was trying to give away. At least I was consolidating my assets like a real Director would!

Because of the London Woodberry deal, I only had 3 picks-  2nd overall, and two-mid second rounders. At the conclusion of the draft, I had 3 young players. Out of the 3, the only player that would amount to anybody is Michael Moore, the player I took at 2nd overall.

The only possible superstar talent is Michael Moore. I don’t have the best training facilities, so hopefully he gets some game time this season to improve.

The downside of the draft is that now I have too many players! I probably have to loan out a lot of the young un’s, as they won’t be able to make the roster. (Players who don’t make the roster and aren’t on loan will be cut from the team.) On the bright side, I do have about 6k spare salary cap space, and I generally like all the pieces that are currently on the team. Given how the MLS transfer period is rather long I think I’ll leave the squad alone as is and see how it goes heading into the next season.

That’s it for this update. If you’ve any questions or feedback on the series so far, please let me know! I can be found on the FMSlack at @avery, or you can drop me a tweet/DM at @avery1822 on Twitter. The 2017 season is starting soon, and I can hardly wait. Stay tuned!