Board in the USA 1.0 : Squad Assessment

You begin to realise the box is somewhat little too big, with a removable lid under the packaging. Its alright, maybe my dad is playing a prank on me.

The moment has arrived. You tear into the packaging, hoping to see that sweet, sweet Nintendo logo, and your face drops a little at what you stumble across instead.

It actually is a box of shoes. A pair of Shell Toe Adidas that you once said looked nice once in the mall a few months ago.

Disappointment sets in at first, over the next few weeks. But once you start receiving compliments for how great those shoes look around school, you start to wear them more. And more. And you realise you’ve worn them for years now, and they still look good as hell.

That’s at least my hope for how this Atlanta United squad will turn out. Because at the moment in February 2016, it’s only looking so-so. 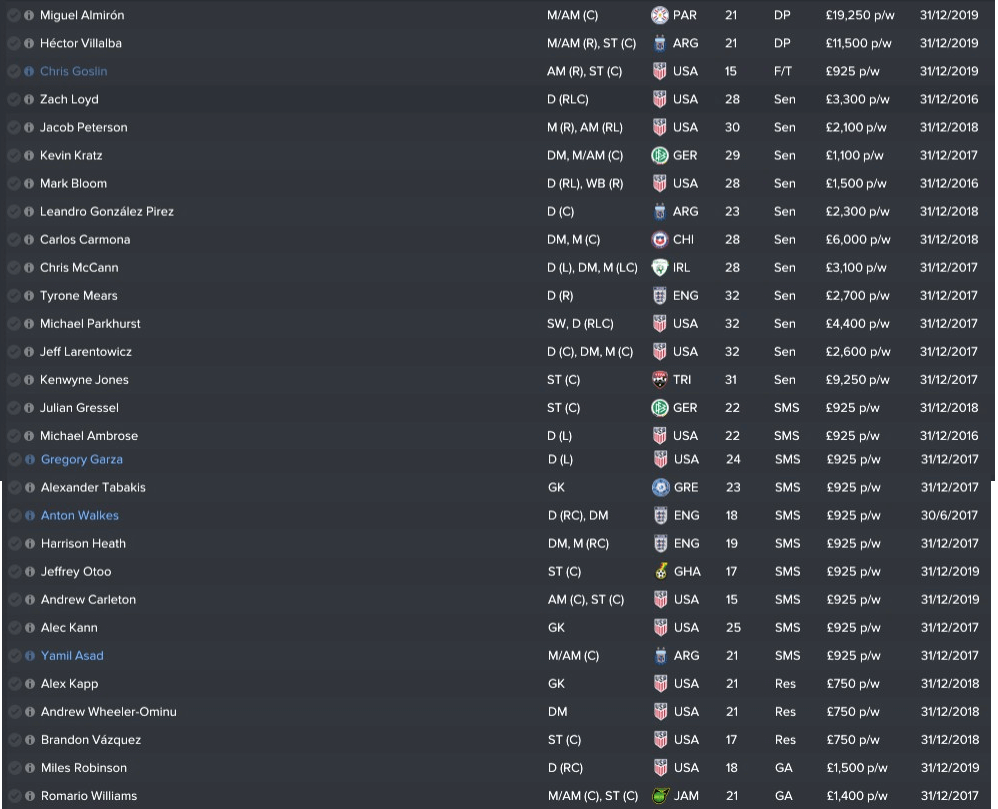 First. There are way too many international players. The MLS rules only allow 8, and I currently have 13. While I could trade for international slots from other teams, teams do not willingly relinquish international slots. More than that, doing so is an easy way to hemorrhage my team’s value for a temporary solution.

Second. The Senior players on my team are very old. My two best centre backs, Michael Parkhurst and Jeff Larentowicz, are 32. They’re slow and can’t jump anymore. I need to find a way to get rid of some of these oldies.

Third. There are some completely atrocious contracts that are going to be difficult to offload. Here are some examples:

This is a bad contract. Just for perspective, the MLS in the 2017 season will have a salary cap of 57,000 pounds a week. Parkhurst is being paid 4,400 pounds a week as an old player. With those terrible physical attributes, he should only be playing backup. A backup taking up so much cap space is definitely a bad contract, and a bad idea.

This guy is a little different. Although he is kind of a good player, he’s 31, and an International. More importantly, he is being paid 9.75k WITHOUT being a Designated Player (I will explain that later). That is almost 20% of my salary cap. So… Sorry Kenwyne, although I want to work with a good target man, if offers come, you will go.

There are of course, certain good things about the team. There is a very strong core of young players that can develop into superstars (or at least, very strong role players) in a few seasons, and it just so happens two of them happen to be my Designated Players.

(Aside: In the MLS, a Designated Player is a type of contract you can offer a player, where the club can pay him as much as he wants, with only a 7k/week salary cap impact. Every team only can have two, with a third optional slot that can be purchased. Designated Players are meant to be the stars of the team which is the rest of the team is built around.)

This is Miguel. It’s clear he is an absolute stud, which (I hope) can be an assist machine for me. Although somewhat unproven, he is a Paraguayan international player, which is always a good thing. His somewhat poor physical attributes would mean that I have to partner him with more physically imposing players who can win the ball and give it to him.

The second player, who is far less exciting, is Hector. He’s clearly going to be a wing player with that kind of speed. With his finishing and long shots attributes being reasonable, I’ve put him on a training plan to turn him into a left-sided Inside Forward. (Whether my Assistant Manager will take me up on that suggestion is another matter).

The biggest perk of all this is that both these guys are on Young Designated Player contracts, which means their salary cap impact will only be 3k/week each. While the Young DP expires when the man turns 24, this gives me 2 years to clear off all the dead weight players without necessarily having to cut them before then.

(Aside: The Young Designated Player is a variation of the Designated player contract, where the salary cap impact is 3k/week instead of 7k/week. Only players 23 and below will qualify. Without purchasing additional slots from the MLS, every team is only allowed to have 2 DPs and 1 Young DP max. If your roster only has 2 DPs that happen to also be Young DPs, their salary cap impact will be 3k/week.)

Now would be a good time to outline the strategy I plan to employ moving forward. It’s quite clear to me that Atlanta United has to focus on youth. My DPs are young, leaving me with a long window to surround them with talent to be championship contenders. Being Atlanta United also gives me the 1st picks of every round in the 2017 Superdraft in January, which means I can pick up 4 reasonably strong young players to pad out the squad. I intend to clear out some of the old players on the team to clear cap space to make way for younger talent, potentially trading them for draft picks from the other MLS teams.

Due to the International rule in MLS, I also definitely have to get more Americans on my squad. While most of my draft picks will be geared toward American players as is, I intend to scout Free Agents to pick up other Americans who can be role-players for the upcoming season, hopefully on Minimum Salary/Reserve contracts.

The next update will be about the deals I make for the rest of the 2016 season up to Draft Season in December, so stay tuned!

If you have any questions regarding the MLS or this save, feel free to hit me up on the Football Manager Slack at @avery.