Thanks to the two above statements it is clear that youth development is one of the biggest talking points in the Football Manager scene. So many people talk about the new generation of players coming through at their club and what to do with them. So many people have attempted to debunk the myths of youth development, but how much difference does playing a young player make to his development?

Well it’s clear to most people that gametime in real life is key to good development. No player became great by not playing football.

So to test this in Football Manager I had to create a controlled environment. This is what we discuss here.

“An environment which is artificially regulated to ensure conditions such as temperature, air quality, etc., remain stable; the condition or state of such an environment”

I created a controlled environment by making a custom database. As an aside, the Football Manager Editor is not a fun tool to use. I created our test league in South Africa with thirteen teams so we could get a good sized league with plenty of games. Thirteen teams, with duplicate players being played in duplicate tactics – a perfect setup for the experiment.

Attributes started at 8 for all players, except for a few mental attributes which started at 10 thanks to the mysterious world of the editor. This is key as we need to be able to easily compare attributes. We also have pretty average training facilities at all clubs which means that when using this information in your game you’ll need to take that into account. We did not train the players in any SPECIFIC way either, meaning no specific role or attribute training. The whole squad was trained on balanced, with a medium intensity.

Development of the Players

So let us take a look at a look at a particular player. Team 13 came midtable, so were average. If we look at their most played player, who played in 23/24 games, we can see that if all of his attributes started at 8 (bar the few mentals mentioned previously), he has received some good growth.

Yet if we compare this guy to someone with 0 game time, we’ll see some interesting results.

Yes, he has actually declined.

Both of these players played 0 games, but one faired much better than the other.

I have looked through the players and it has happened a few times. But the vast majority of players with 0 game time have merely stagnated. Some even had no appreciable attribute changes at all. I found a player with 14 starts whose technical attributes did not change; he had an average rating of 6.56 across those 14 games. 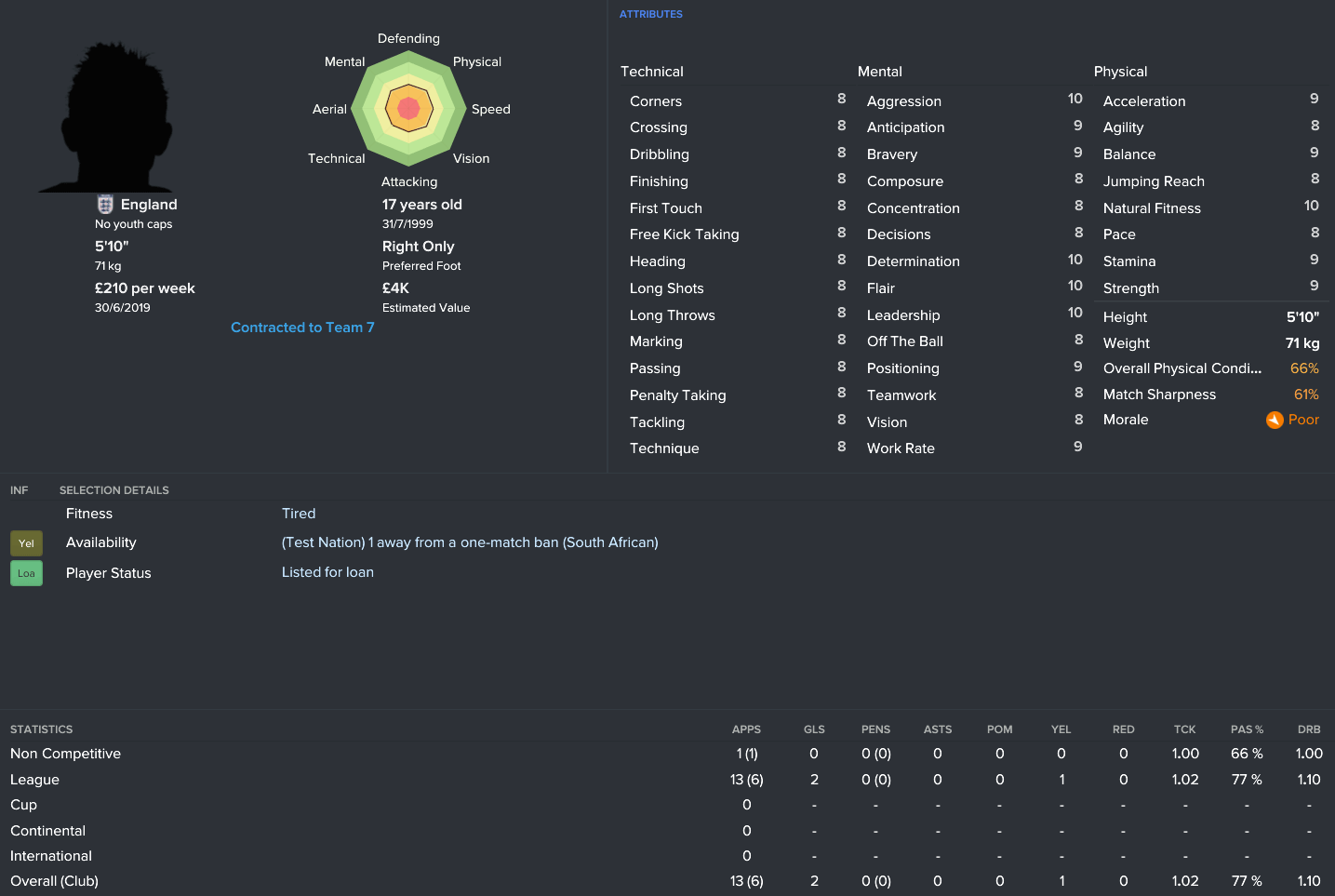 Does average rating affect development then? This guy has the highest average rating across the season (21 starts) but has not particularly improved. Perhaps it doesn’t have a big impact?

The player with the most appearances, 28 starts and 2 substitute appearances (inc. friendlies), improved a good amount.

The average player came in with about 12 games and improved like this guy.

So does game time affect development? Yes, but seemingly only after a certain amount of appearances. Does it matter how much game time you give developing players? Yes, but only if you’re willing to commit. It might be worthwhile keeping a player in the youth squads if you aren’t going to be playing them regularly (coaching and facilities comes into play). Players who played absolutely 0 football did in some cases decline, which for me was both surprising and unsurprising. Being young did not counter the lack of game time. So it has to be worthwhile getting players on the pitch, but it would be interesting to see how this changes their development if they are playing in a poor division vs a good division, or in first team games over youth games.

I also did not spot a big difference between those who played well and those who did not. Development was different for all players, which means there may have been some factor I did not control. It is that or there is some form of complex algorithm we have no hope in cracking wide open. I suspect the latter, though do not rule out the former.

Check out my twitter (@OffThePitchFM), and click my name at the top of the page to check out everything else I have posted.