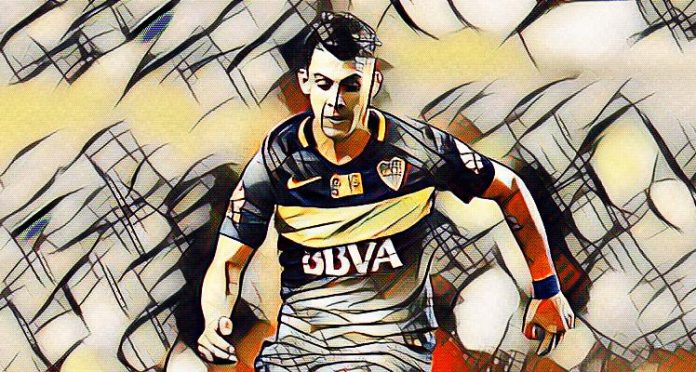 Argentinian football has a long and storied history of producing talented young players who are forged in domestic competition before going on to star in European football.

From battle-hardened defenders like Roberto Ayala and Daniel Passarella to classy midfielders like Fernando Redondo and Javier Mascherano through to two of the best players that the world has even seen in Diego Maradona and Lionel Messi there seems to be no end to the production line of talent.

It is an economic reality for Argentinian clubs that they will lose their best players to the lure of European football. The wages and level of competition on offer domestically simply does not compare to that of Europe. The aim, therefore, is to ensure that young players are continually produced and given the platform to attract big money bids for their services.

There are of course two clubs who traditionally dominate the landscape of Argentinian football in Boca Juniors and River Plate. Both sides have had their problems in the recent past with the latter suffering the ignominy of relegation before bouncing back in to the top flight. One thing that has not changed however is their ability to produce talented young players.

One of the brightest talents in Argentinian and South American football at the moment is currently turning out in the attacking third for Boca Juniors and is on the shortlist of many European clubs, that player is Cristian Pavon.

Pavon did not however come through the youth setup at Boca and instead began his career in his native Cordoba with Talleres De Cordoba. His talent, however, was immediately evident and in 2014 he made the switch to Boca.

Originally a tricky wide player Pavon has developed the ability to play in the forward line as well as in the traditional number ten position with his explosive movement and tight control making him extremely difficult to effectively mark. We have seen him play centrally or from either flank for Boca and although he is predominantly right-footed he is effective on the left where he can cut in and shoot on goal.

Recently we have seen strong links to clubs in both England and Italy for Pavon and it seems likely that he will be the next player to net Boca a large transfer fee.

How though does he look on Football Manager this year? 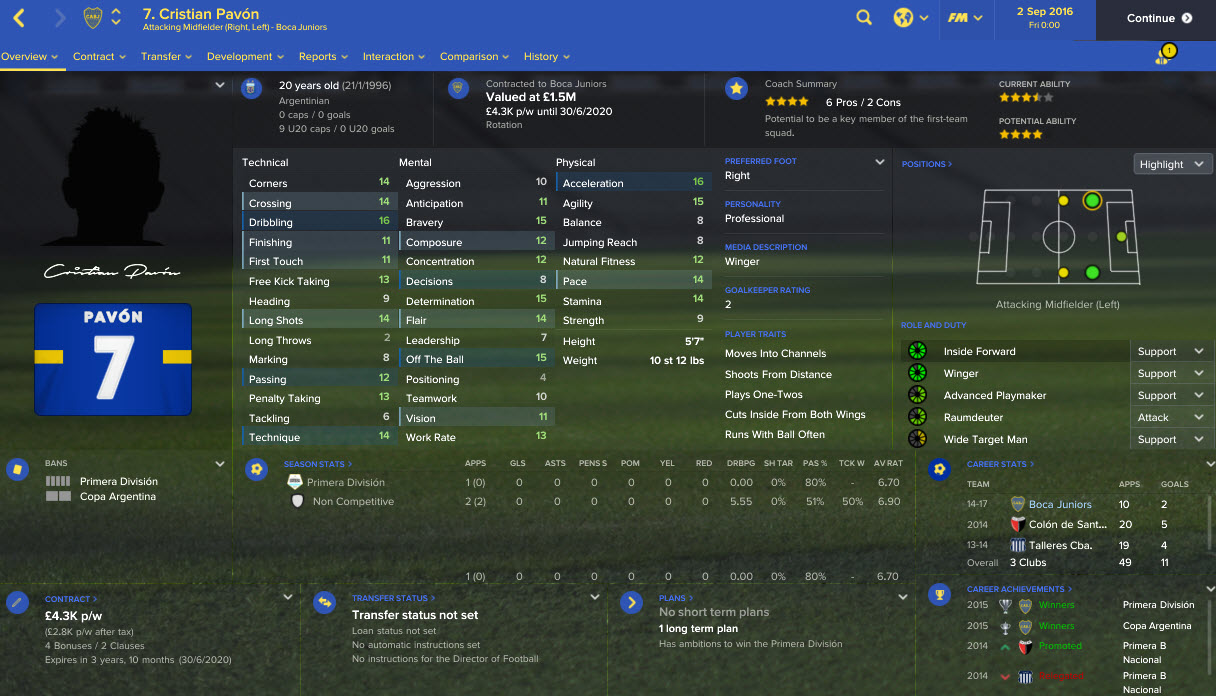 A very good base to build on for a young player. First of all he has a professional personality which should see him develop well as his career goes on. Then we see that he already has five player traits. The only one that I would look to have him unlearn is the dreaded shoots from distance other than that though there are no immediate weaknesses.

He is quick with 14 for pace and 16 for acceleration and technically very strong with 16 for dribbling and 14 for crossing, long shots and technique.

Mentally he is also strong for his age with 15 for bravery, off the ball and determination.

He may not come cheap when you begin negotiations with Boca but he is definitely an elite prospect within the game.

Cristian Pavon is a rare commodity in young players in that he is equally capable of finishing with finesse or with power. When played on the right-hand side or in a deeper central role his powerful shot and self-confidence are a potent combination as he will cut inside the defender before unleashing powerful accurate shots at goal.

With that said he displays remarkable composure for a 21-year-old with his ability to finish chances in the penalty area. 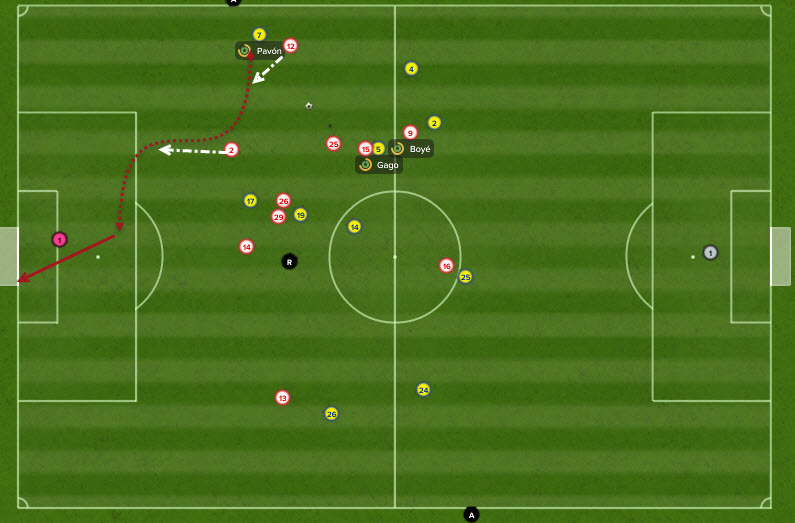 Here as Pavon takes possession of the ball out wide he immediately drives infield with the ball. He commits two defenders and easily beats both of them with his attributes for pace and dribbling coming to the fore. 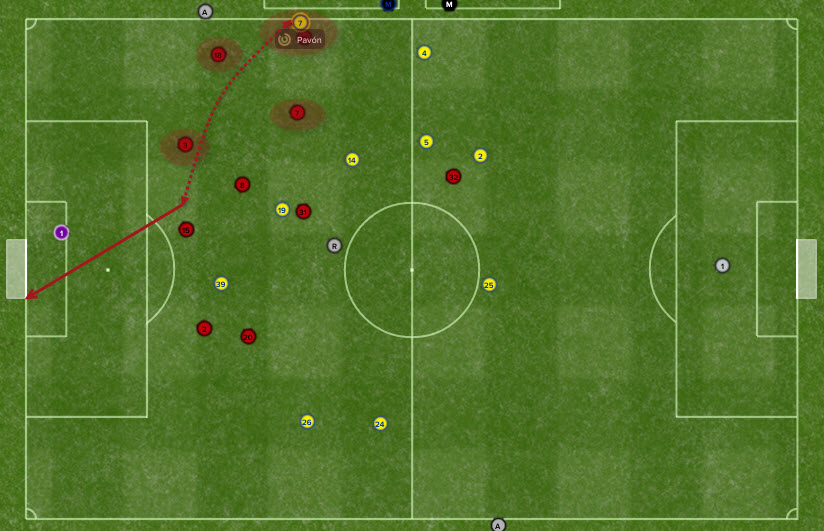 Here Pavon take possession wide on the right in an isolated position. There are three defensive players positioned at depth to prevent the winger from penetrating centrally.

This however does not stop Pavon from doing just that and driving at the heart of the opposition defence before finishing across the goalkeeper in to the corner of the net.

The movement and finishing of Pavon in real life mirrors what we see in the game nicely.

In this short clip we see Pavon taking possession of the ball isolated against the defender before twisting inside and out and finally finishing past the stranded goalkeeper.

Ability in one on one situations

As befits a player whose original role was in the wide areas Pavon is extremely effective when isolated in one on one situations against a wide defender. His pace and close control give him a variety of options as he is able to attack down the outside or the inside of the defender making him extremely difficult to read.

This ability and range of movement transfer extremely well to the central positions where the ability to beat a man and move into space is even more dangerous to the opposition. 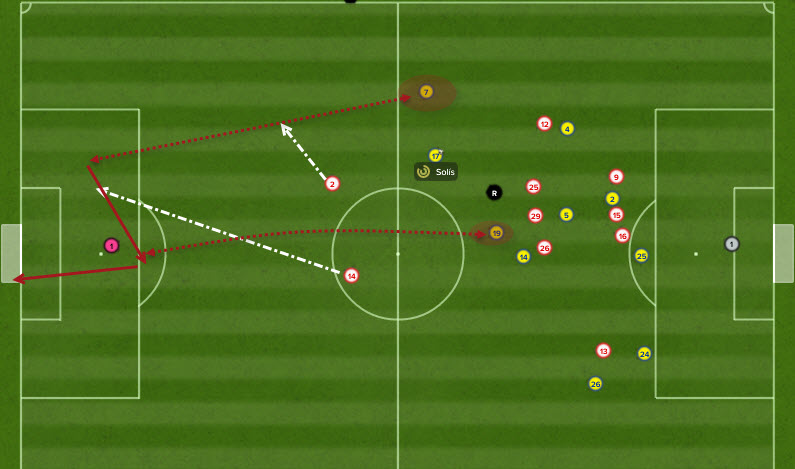 Here Pavon takes possession of the ball out in space and immediately moves forward to engage the first defender. He beats the first man very easily and continues to move in on goal now with only one defender left.

As the last man moves across to engage Pavon he is able to simply cut the ball back across for the advancing player to move in and score with ease. 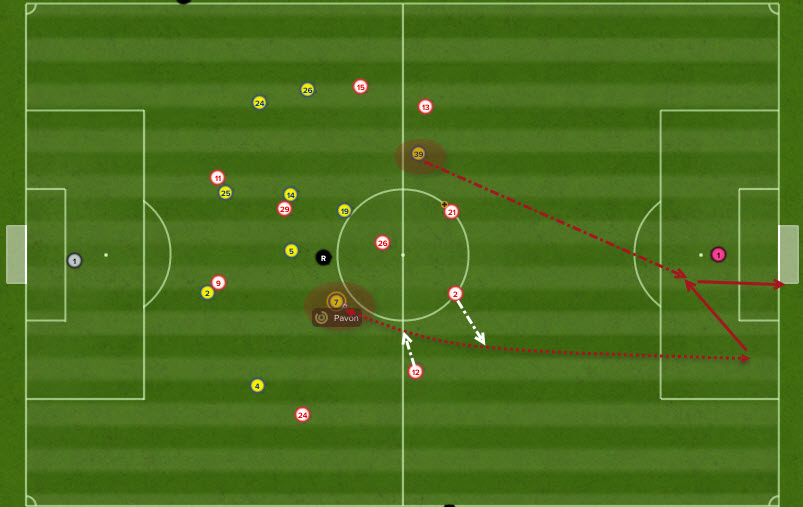 Again here we see the ease with which Pavon engages and beats defensive players. As he takes the ball centrally he immediately starts to move in towards goal. Once again there are two defensive players who try to move in and engage on Pavon but he easily beats both.

This time as he reaches the penalty area he cuts the ball back across the box for the forward to score easily.

Once again the researchers for SI have done a great job in identifying the tendencies and attributes of Pavon as we can see from real life footage.

As the ball is worked out to the right side of the field we see Pavon fake the defensive player with a dummy before bursting beyond the defensive line.

The final ball in to the box is excellent but unfortunately the forward is unable to finish.

In the modern game, it is equally important that wide players are capable of passing the ball intelligently and linking up with their teammates. Whilst this is an area of the game that Pavon was not initially strong in he has made an impressive improvement over the last twelve months to his link up play.

Indeed the ability to link the play and choose the right option when he has possession will be key for Pavon when he makes the move to Europe. 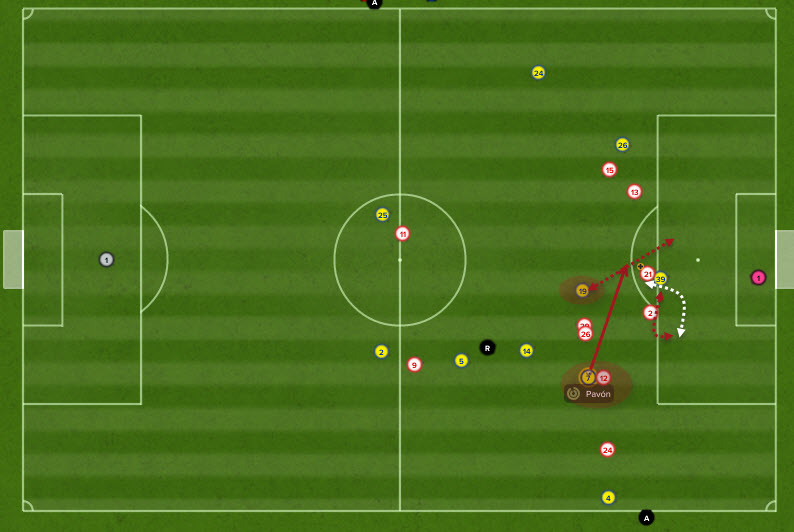 As Pavon takes possession of the ball in the right hand side half space he is immediately closed down by a defensive player.

Instead of trying to dribble in this tight situation he is instead able to read the movement of the attacking players. As the forward cuts across the box and leaves the central space empty there is a delayed runner from midfield who is able to take possession as Pavon feeds the ball in to the central space. 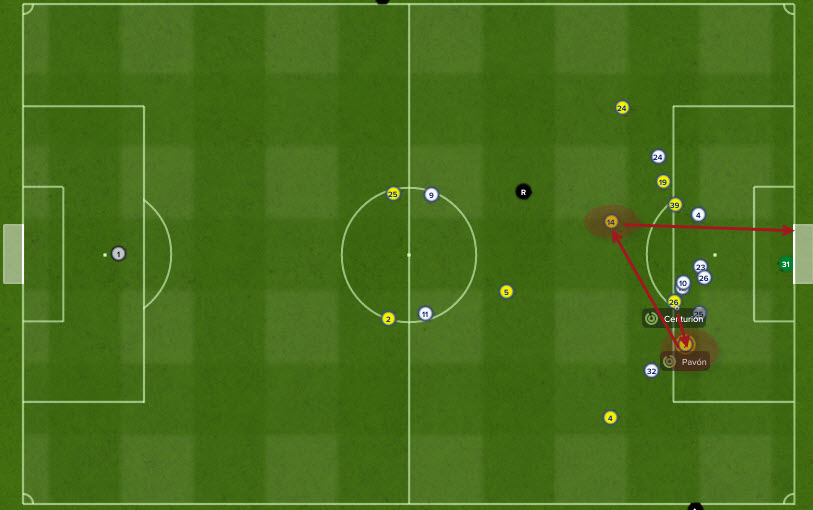 Pavon takes the ball in a tight area from Centurion as he has carried the ball across the field. In this example you would expect to see Pavon turn and drive for the by line but instead he sees a delayed run from the midfielder and plays the ball straight back across and in to space.

This ability to make the correct decision is apparent in much of Pavon’s play within the game.

Here we see Pavon being played in behind the defensive line and in to space. As he collects the ball he does not look to engage the defender needlessly and nor does he drive towards goal. He scans the options and cuts the ball straight back to a team mate for a strike on goal.

At 21 years of age, Cristian Pavon is approaching the perfect age for a move to European football from Argentina.

I would expect to see his first move to a nation like Portugal or Spain where his style of play would fit perfectly. He has already shown the capacity to evolve his game however and a greater involvement in the defensive phase and a willingness to pass the ball into advanced areas are signs that he is developing into the perfect modern winger.

In Football Manager his best role is as a winger on attack playing from the right hand side of the field. His capacity to engage and attack defensive players allow you to always have an attacking outlet in the attacking transition.

There is little doubt this if managed correctly Pavon will go on to become one of the elite players in World football within the game. Make sure you pick him up before one of European footballs giants comes in for him.

There is little doubt that the man from Cordoba is prepared to continue the tradition of successful Argentinian footballers in Europe.