They say bad luck comes in 3’s, quite frankly I’ve never really taken notice of superstitions like that. As we headed into the new year and left 2016 behind, I felt the need to change my job as I was getting bored and the small amount of work was starting to drive me crazy. Eventually, I found a new job as assistant manager of a big retail company, a nice up in pay and a company that was expanding all the time. Starting my new job I had to go for 4 weeks training up in Sheffield, accommodation paid for in a very nice hotel, things were looking up. Halfway through my training course, one of my best friends was having a stag do in Leicester. This was going to be a nice break in between my training to have some fun and recharge my batteries. Unfortunately, this is where things started to go wrong.

Firstly, just before the stag do I lost my wallet which for a lot of you out there who have experienced this it is a horrible feeling and causes many issues. Being in a strange place with no money and to be nowhere near your bank isn’t ideal. Luckily my train to Leicester from Sheffield was already paid for by the company so I could at least make it to the stag do and get to a bank there. As the bad luck sequence was starting to take shape, a taxi driver more unsure of his surroundings in Sheffield than I was late picking me up to get to the train station. As if he knew I was in a rush he decided to drive slower than any taxi driver in the history of taxi driving!!!. I arrived just in time before my train left. As the tickets were already pre-booked I just needed to collect them, however, I ran into another issue. To pick up a pre-booked ticket you need to put a credit or debit card into the machine, seeing as I had lost my wallet I had no card. Going to the cashier I explained the situation but said as I had an email confirmation of my ticket was it possible to get a ticket as my train was leaving in a few minutes.

Sensing I was in a rush the lady spent more time than the taxi driver who got lost and failed to help me following a few minutes of arguing. Finally, she found a card from somewhere, possibly hers and got me my ticket. Her helpfulness, however, was far too late and my train had already gone. If you are keeping score I would say that was my second piece of bad luck. After losing my wallet, my parents had driven to Sheffield and given me some money, so at this point I was able to buy ANOTHER ticket to Leicester and make the stag do. At least a weekend away should take my mind of all this mess. Sometimes, I can be rather negative as a person and often over-think situations. I make a big deal out of the smallest of tasks. On the train journey Leicester, watching Ride Along 2 for some comic relief I started having feelings that at this stag do something was going to go wrong. Maybe it was the previous bad luck that affected my judgement or and I say this with all seriousness…I’m just psychic.

As the stag do went on we headed into the last day with a few sore heads, but overall a great a weekend for the lads. The stag recovering from a heavy night of drinking while dressed in full rugby kit including a scrum cap and a long blonde wig which oddly suited him. We had two items left to complete the stag weekend, the last part of the weekend was doing some eating challenges at a pub called the Local Hero. However, before this, we all went to play Zorb football, something I have never done and probably something I will never do again. After an hour of being unable to see anything around me and being knocked over more times than I can remember, the session was about to end. The last part of the session was zorb bowling. After having enough of the day I was going to sit out of this last game until the encouragement of my friends to have the last run at the pins. Just like I used to do when playing rugby, I thought if I going to do this I’m going to do it with all my power. Running full speed into my friends as the bowling ball, hoping to put a stamp on the weekend. This is when things started to go really wrong. Just before I had the stag who was positioned at the front of the group, I slipped but still went into him. Rebounding off him going back over my leg, there was a horrible sound followed by me screaming in agony and punching the ground in despair. I knew straight away this wasn’t good. 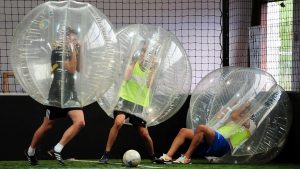 Lying on the ground with the group standing over me, I knew something was seriously wrong. One of the group called for an ambulance which at the time was unavailable to get to me for a few hours due to being busy. This will provide a nice anecdote later on in the story. The choice was to wait on the pitch for two hours until the ambulance wanted to turn up, or my friends had to drive me to the hospital. After being carried to a car and taken to the hospital I went through all the fun that you get from waiting in the hospital. A few hours and an x-ray later, provided me with a response from the doctor “well you’ve done a good job on that” which as you can imagine didn’t fill me with the most confidence on my injury. A broken and dislocated ankle was the diagnosis, meaning I would need surgery to fix it. The scoreboard here will now show 3 pieces of bad luck. If I was really picky I could say its at least 5 bits of bad luck but we shall stick with the 3 for now.

After spending an hour driving back to Gloucester from Leicester with my leg propped up on my dad’s dashboard in his van, I was heading back to home for another set of x-ray’s. Once again I was informed that I needed surgery, which I already knew. Due to the swelling, I couldn’t have it done for a few days. Finally, the surgery was done and I was back in one piece with a bionic ankle. Unfortunately, this isn’t a superhero movie. Apart from a few screws and a plate in my ankle, I have no super powers. After this, I spent the next few weeks hopping around the house to do the simplest of tasks and keeping my foot elevated.

Then came for argument’s sake the 4th bit of bad news, my new job decided that they would cancel my employment as I would be unable to join the new shop for the opening and they needed a replacement. This was the most painful bit of news as without a job I had no money coming in and a broken ankle isn’t going to help me find another job. So for the first time in my life since starting work, I found myself unemployed. Apart from the free time to play football manager and catch up on TV shows that I have missed, being unemployed and immobile wasn’t the most enjoyable time of my life. The worry of having no income and the frustration of simple daily tasks becoming awkward and difficult put me in a bit of depression.

During this period I felt lost, I felt my confidence oozing away from me, I felt lower than I have in years. When feeling like this I have always had a tendency to stay away from people and just hide away. My advice for anyone else that has felt like this, don’t take that approach being isolated and hiding away won’t help. This, however, is how I’ve dealt with such feelings in my life and I’m stubborn in my ways. During this time, football manager became an outlet for me to do something and pass the time. Luckily you don’t need to move too much to play football manager so I was all set. After spending countless hours all across the world managing different teams achieving great things I was starting to lose my interest in the game. The lack of outside stimulus was starting to have its effect on me and I was getting bored.

As I was recovering, my parents who had gone for 3 weeks holiday in their villa in Spain, came back and let me stay with them in their renovated bungalow. Being in the bungalow made it easier getting around rather than awkwardly climbing the stairs in my own house. Whilst looking after me, my parents could sense I was struggling with everything that was going on and suggested that when I was back on my feet I should spend a few weeks out in their villa. After not being on a holiday for a few years and after all this, some time away might do me good. Swapping the grey clouds of England for the sunny blue skies of Spain is hardly a tough choice. I booked my plane ticket and I was heading to Murcia. This would be the start of something new and exciting but at this point, I had no idea just where this journey would take me.