As 2016 quietly fades into memory, it leaves a trail of emotional devastation, and a discomforting sense of doom for what the next twelve months will bring, in its wake. In that annus horribilis, the perpetual loss of beloved cultural icons and a omnipresent political turmoil became the new normal. Even so, on these shores there was one event that stood head and shoulders above the rest of the misery for its ability to generate controversy: the result of the EU referendum.

Since last June, the Conservative government has seemed rudderless in their attempts to actually leave the European Union; a speedboat without a driver trying to negotiate uncharted waters. Except, perhaps they’re not so uncharted.

In a twist worthy of The Thick of It, it turned out that Miles Jacobson and the rest of the good folks at Sports Interactive were better prepared for the result of the referendum than Her Majesty’s government. Football Manager 17 had anticipated the consequences of a Leave victory and had incorporated three different outcomes of a pro-Brexit decision: soft, hard, and hard + Scottish independence.

This notoriously drew the ire of a commenter in a review on the app store for the mobile version of the game: 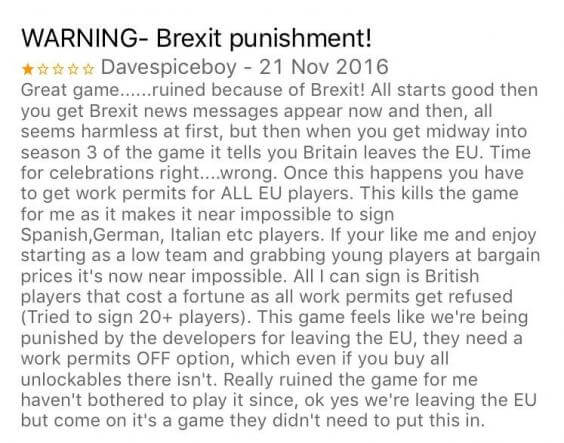 A game that has constantly prided itself on being an accurate simulation of reality over the past twenty years made an effort to accurately reflect reality? Shock horror. But rather than rage against, we’re going to embrace the dying of the light.

Which brings us round to this challenge. As Davespiceboy so pertinently points out, it is likely that signing foreign players is going to become both expensive and difficult due to the change in work permit regulations.

Therefore I’m going to try and play the game in the most Brexit-proof manner possible to try and get ahead of the curve. As such, I’ve established a set of guiding principles that should enable me to capitalise on the hardest of Brexits, as well as aligning myself ideologically with the spirit of Vote Leave:

Most of those are fairly self-explanatory but allow me to elaborate a little. That first rule may seem a little lenient, but given the current make up of Premier League squads, going English-only immediately would cause too much disruption to squad harmony. Instead, I’ll go exclusively with British and Irish players to start with, before phasing out everyone who isn’t English. The inclusion of Ireland is contentious, but I’ve allowed them for reasons of geographical proximity, cultural similarity and historical connection/oppression (plus a more prosaic, pragmatic reason I’ll get to later).

The age range is primarily to ensure that players have sell-on value, which obviously aids rule #4. Signing players who are predominantly in their early twenties means that they should be ready to slot straight into the first team squad (as well as avoiding any issues with youth players not developing properly) while also giving them plenty of room to develop and subsequently increase their transfer value. With the consequences of Brexit starting to be felt several seasons in, players of this age should be approaching their prime by the time that other clubs become desperate to sign English players so I should be well-equipped to cash in.

Utilising the club’s academy is obviously cost effective and also provides good local English jobs for good local English lads, while aiming to be profitable matches Vote Leave’s belief that the UK can be self-sufficient without access to the single market and without the interference of those meddlesome bureaucrats in Brussels. As for the attributes – the decision to leave the EU was made by BRAVE English men and women, unafraid to make the hard DECISIONS and who wanted to take back CONTROL. Hence why I’m looking for the same from my players.

Look at the rules. Learn them. Cherish them. Plaster them on the side of your campaign bus.

Now the small matter of choosing which club to execute these ideas with. There are some obvious criteria here. I’m looking for a squad already largely comprised of British players. I’d like to be a club with some room to grow. And I obviously need to choose one from an area that is likely to have voted to leave the EU.

This would undoubtedly be a good concept for a lower league challenge, but I’m impatient and hungry for success as soon as possible so I decide to go for a Premier League team. A quick glance around the top flight reveals some good candidates for this challenge.

What about West Brom? Any club managed by Tony Pulis is a good match for my philosophy by default, and West Bromwich is about as Middle England – both ideologically and geographically – as it comes. On closer inspection though, their eligible players are mostly from Northern Ireland and Scotland which would mean a big rebuilding job. They’re out.

I’m tempted by Burnley. They have a squad populated by very few foreign players and have a number of talented English players in their ranks. Plus, Burnley was the home of the first county council seat won by the BNP, so there’s that. However, I can’t, in good conscience, unseat a man with a voice like a handful of loose change chucked into a washing machine, like a bag of nails being blended in a NutriBullet. Sean Dyche is the crown prince of the Proper Football Men and will thrive under the veil of Brexit. Long may he reign.

Hull? Strong contingent of English lads there supported by some decent Scotsmen at the fringes but their squad is in tatters and the club as a whole is a disaster zone. No thanks.

On reflection, there’s only one real choice here. As soon as I laid eyes on them, I’d decided on the new apple of my eye. Or perhaps that should be cherry.

I opt for Bournemouth; they’ve got a squad of good quality British players, strong demographic support for Brexit and, of course, they’re on the coast and subsequently our first line of defence against those bloody foreigners, coming over here and enriching our culture and making valuable contributions to our economy and national life.

I hop on the MegaBus from Victoria down to the South Coast to put pen to paper. I sit down with Jeff Mostyn and we hammer out terms and discuss vision: 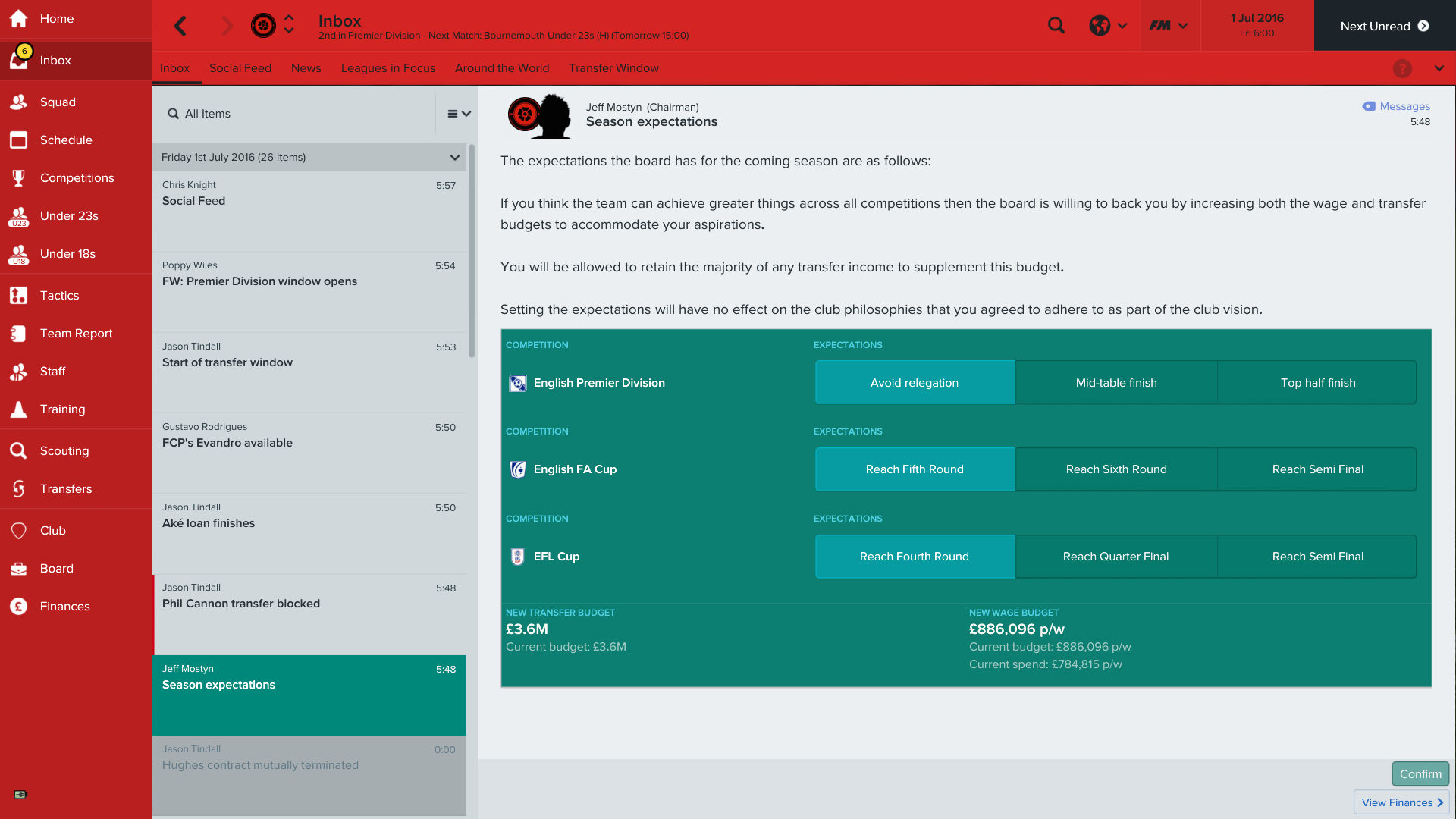 At this point, I should probably outline what I’m hoping to achieve so it’s measurable and so that I can be held accountable when it goes horribly, horribly wrong.

Season One: Consolidation. A mid-table finish would do nicely and getting a single player in the England squad would be a bonus.

Season Two: Top half finish, plus a cup run, plus a fully British and Irish squad is the goal here.

Season Three: I’m looking for European qualification, a cup final, multiple players in the England Squad and 75% of squad players being English.

Season Five: League title and all of the above.

This will be my EdStone: 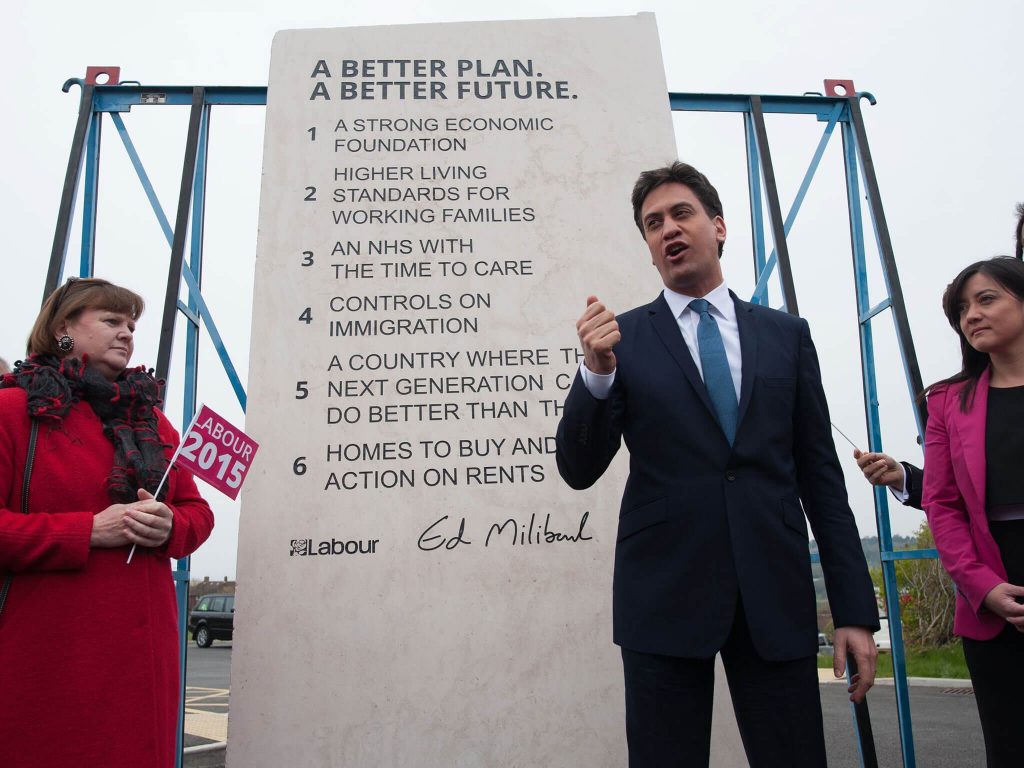 Let’s hope it works out better for me than poor, dear Ed.

With that settled, it’s time to assess the state of the players and the staff…