England played Germany on Wednesday in what was Gareth Southgate’s first game as permanent manager. Having impressed during his time as interim boss, undefeated in four games, he was given a chance to showcase his managerial abilities on the national stage and show he was different from past managers.

During his pre-match conference Southgate said that England “must get off their Island”, in a football context, which showed that he is willing to experiment and that was easily noticeable during the game against Germany.

The England boss used a three-man central defence in a 3-4-3 formation, something that was last used in a humbling defeat to Croatia in the forgettable McClaren era and compared to the habitual 4-4-2 and 4-2-3-1 that previous national bosses have used, it could be seen as a drastic shift from the norm. 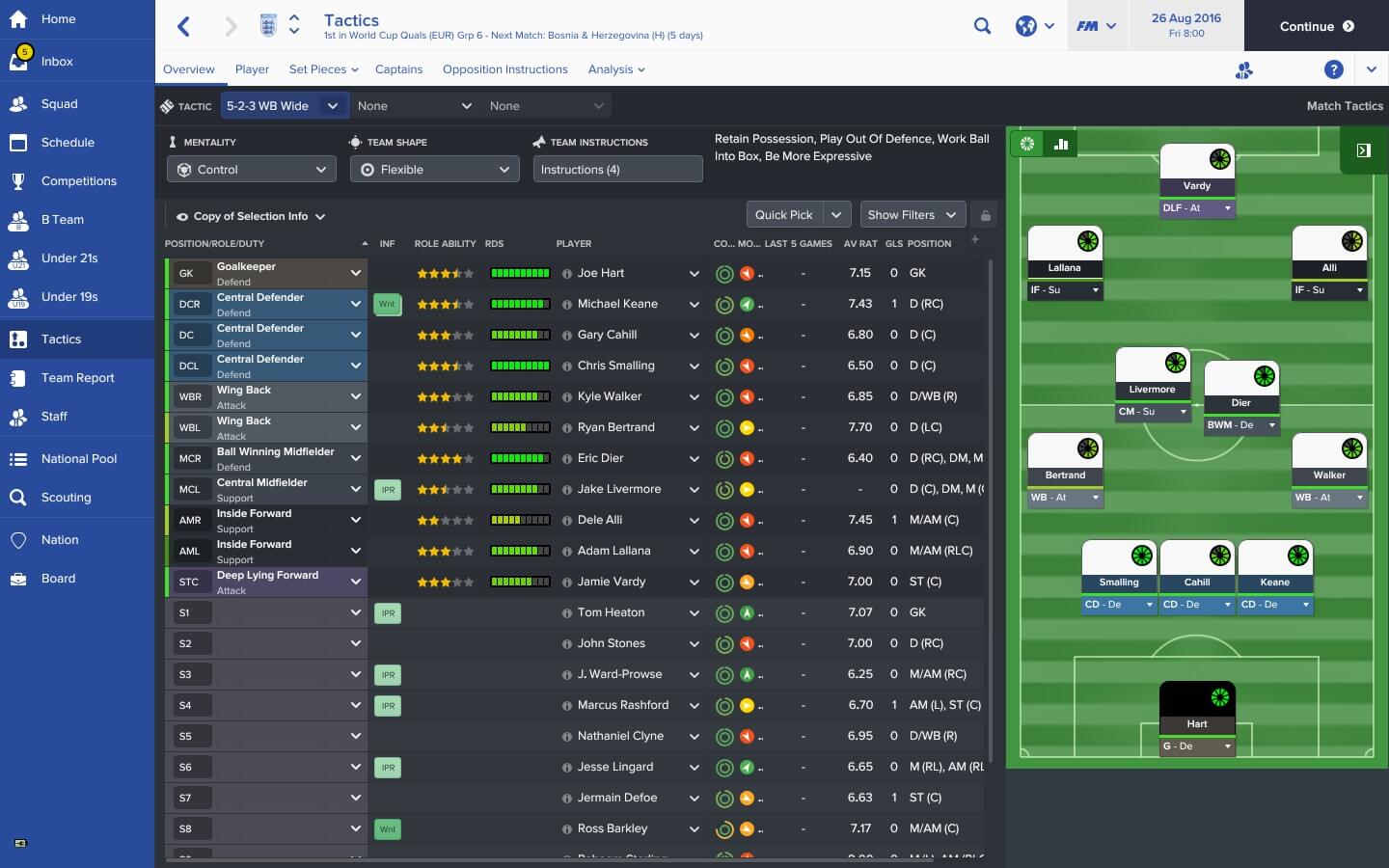 The formation itself has a striking resemblance to Antonio Conte’s Chelsea, utilising almost the exact same roles as the Premier League leaders, using attacking wing backs, inside forwards and of course the three-man central defensive unit.

The inside forwards start wide but move more centrally to support the striker and try to create an overload in midfield, with the two wing backs providing the width in the team they can stretch the play and create gaps for the inside forwards and the two central midfielders to take advantage of.

The three-man defence will keep tight and narrow during the defensive phases of play and slide as a unit to where the danger is, this works well to delay any counter attacks, allows the wing backs to get back in to position and helps stop the opposition from working the ball into the box too often.

During restarts and attacking phases the defence will spread out, this provides a few more passing options, spreads the play more and if they are caught on the counter they can close down the opposition quicker, it also allows the wing backs to push further up the field. 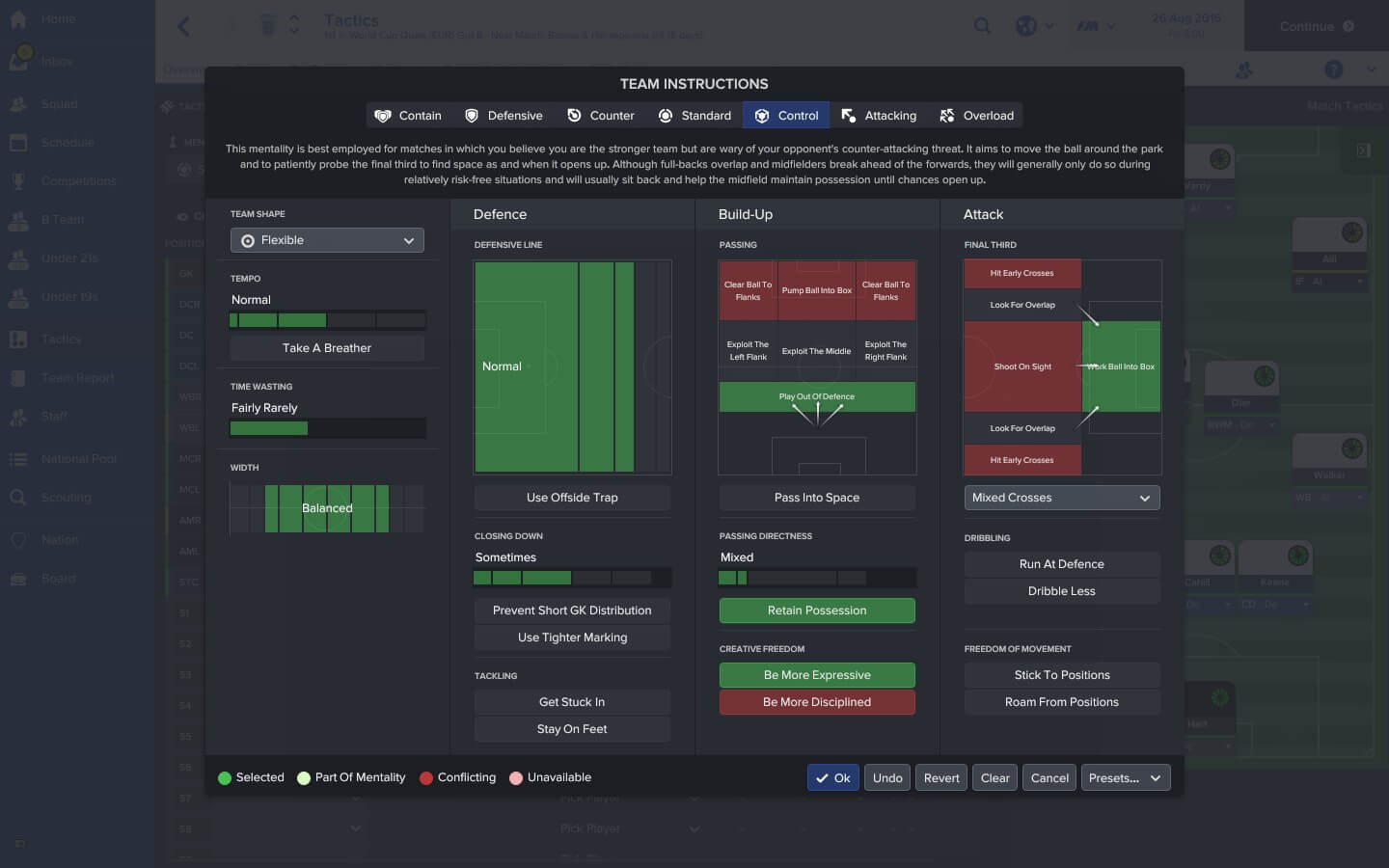 In terms of the instructions Southgate was using all the pieces of the England DNA, looking to dominate possession, adapt their defensive style to the opposition they are up against and play with intelligence and creativity.

The mentality is set to control, this enables the team to keep hold of possession and dictate the speed of the game.

Play out of defence, England have been playing from the back under the past few managers and is part of the DNA, they want to build from the back.

Work the ball into the box, playing from the back and keeping possession tie in with this, England try and stay away from having too many long shots and attempt to work it in to the box as much as they can instead, trying to forge easier chances. 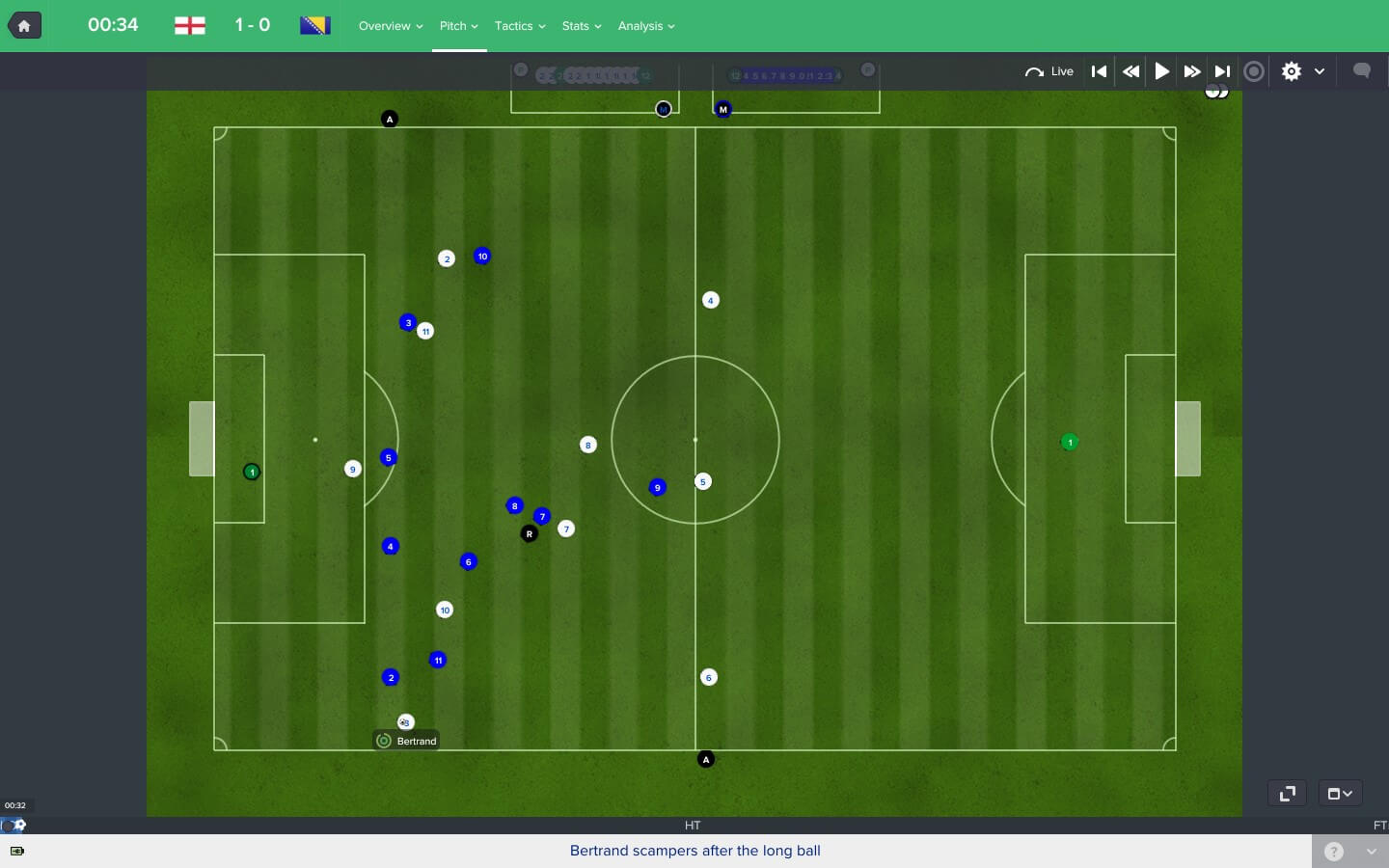 Here we see Ryan Bertrand with the ball on the right flank, both the wing backs have pushed up high, with the inside forwards moving more central to back up the (offside) striker.

Also, note the back three spreading out during attack, providing an option for a pass back and if England loose the ball they can press the attacker quicker and nullify the counter attack. 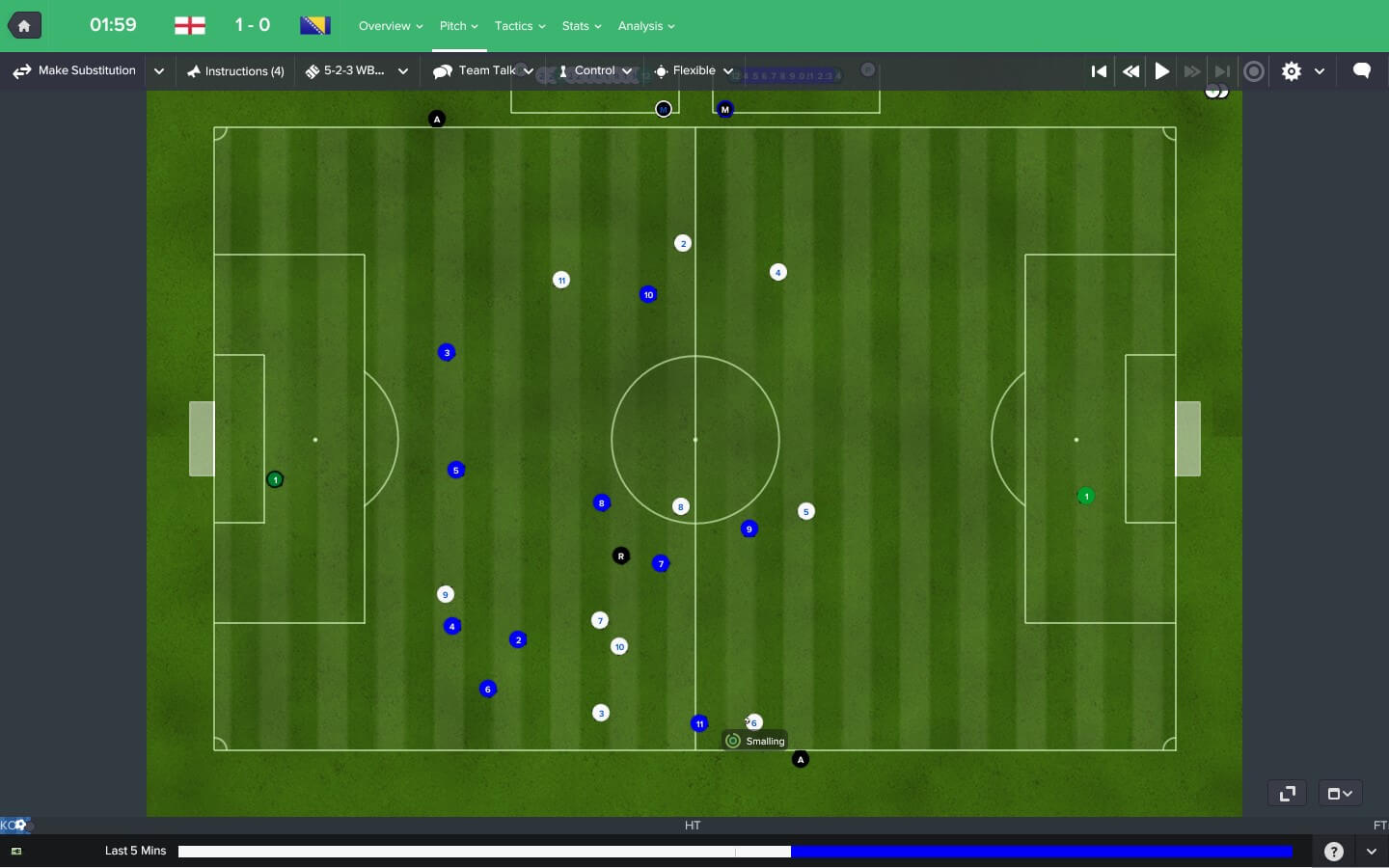 Chris Smalling has picked up the ball in this shot, as you can see the three centre backs are very wide, and forcing the opposition wingers to chase down two of the defenders, leaving space in front for the wing backs to use.

With the team playing very wide it is stretching the play and creating gaps in the middle for the inside forwards and the centre midfielders to take advantage of. 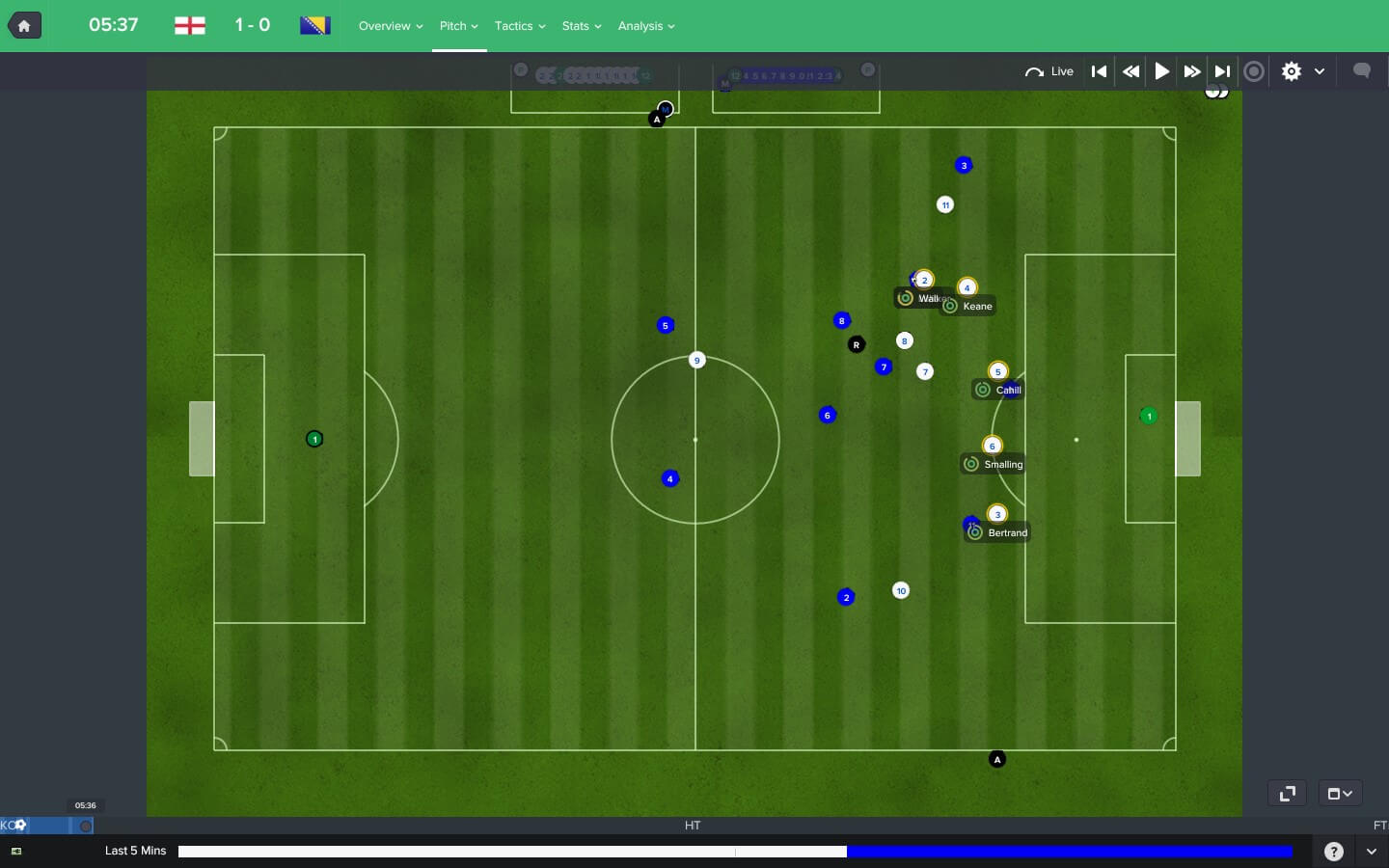 During the defensive phase the back three and wing backs get very narrow to stop Bosnia playing through the middle, here Kyle Walker is closing down the ball handler with the other four defenders covering two thirds of the eighteen-yard box. The inside forwards have taken up defensive positions out wide, marking the wingers.

The match ends 3-0 to England a split fifty/fifty possession stat showing the team weren’t dominating possession, but made their chances count. All three goals came from Jamie Vardy and were all scored inside the penalty area. 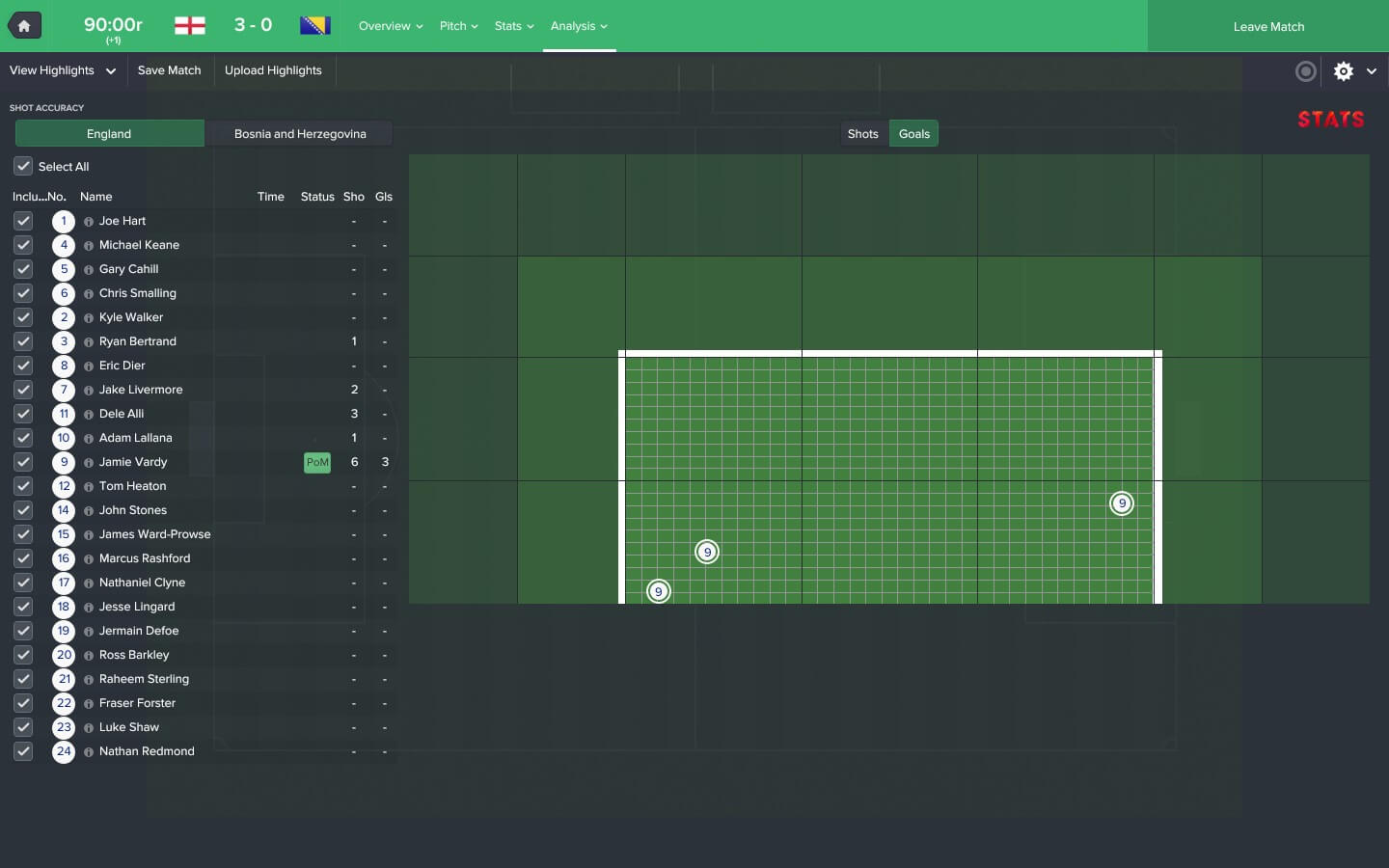