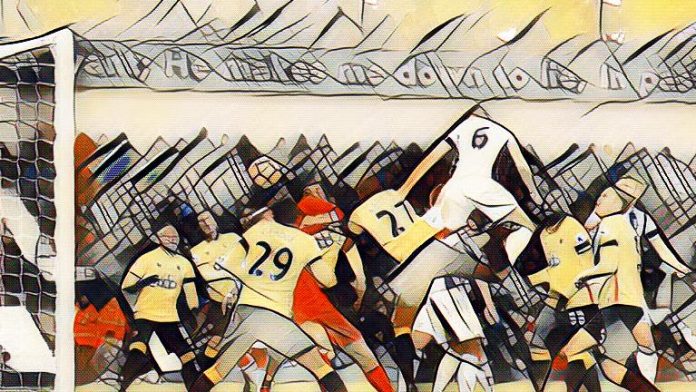 It’s no secret that West Brom have been clinical from corners this season with an incredible 13 goals from their 118 corners so far, giving them a corner conversion rate of around 11% – far higher the “expected” average of around 3%.

This has led them to the heady heights of 8th, but think about how implementing such a system in your FM save would benefit you – if you had 118 corners and left the set-piece tactics alone and scored at the 3% average you’d be expected to score 4 goals – just where would an extra 9 goals get you? Promotion? Avoid relegation? Winning the title?

It’s food for thought, so let’s try and replicate West Brom’s corner tactics in Football Manager 2017 and see if we can achieve anywhere near the same amount of success – first though we need to analyse what each player does so we can try to turn and turn that into a viable tactic, so let’s look at the most recent goals West Brom have scored! 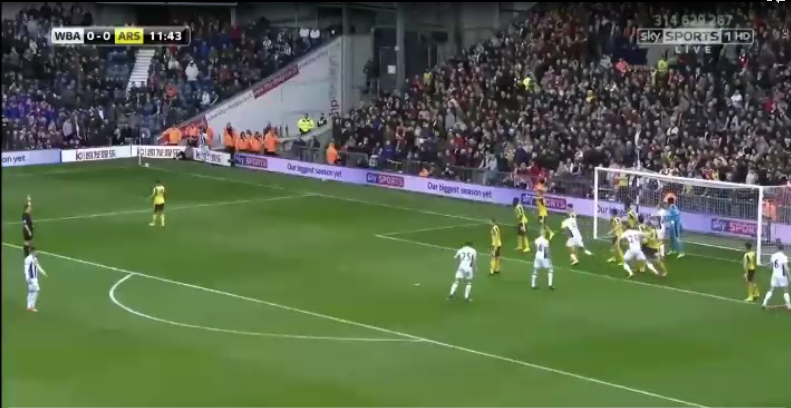 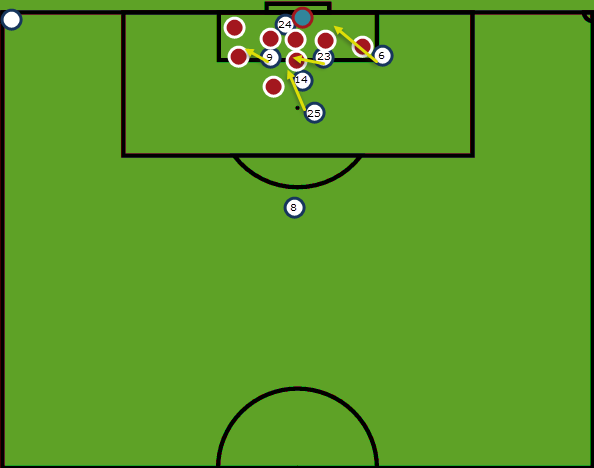 We can see here that despite being outnumbered quite heavily, West Brom clearly have a plan that works, the corner is an inswinging corner whipped in by Nacer Chadli. Darren Fletcher (#24) stands by Cech in the blue. Rondon (#9) and Gareth McAuley (#23) both make near post runs. Jonny Evans (#6) makes a run towards the back post whilst goal-scorer Craig Dawson (#25) makes a run in from the penalty spot, losing his man in the process. 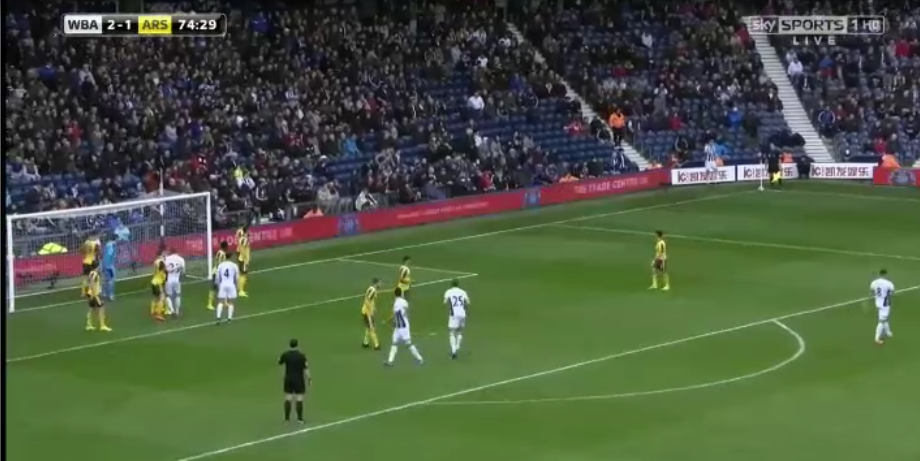 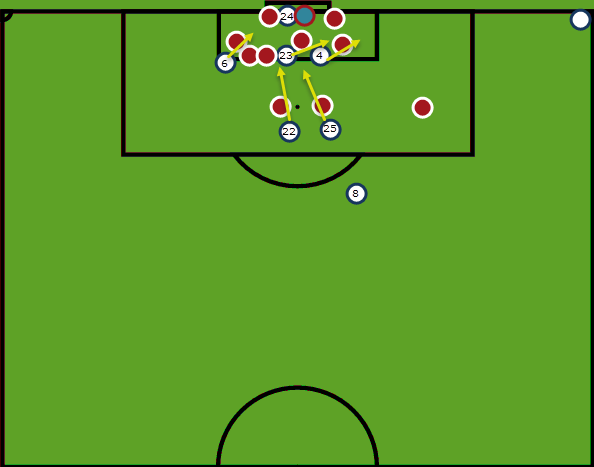 The second goal West Brom scored from a corner and their third of the match was a near replica, with the inswinging corner this time coming from the other side from McClean.

We can see that both McAuley (#23) and Rondon’s replacement Robson-Kanu (#4) make the same runs as before, with Fletcher still challenging Cech and Evans still making a run towards the back post. It’s Dawson (#25) again who gets the header but this time he’s also joined by Chadli (#22) who makes a similar run.

So the premise so far is simple, drag players out of space with dummy runs and then attack the space left with runners. 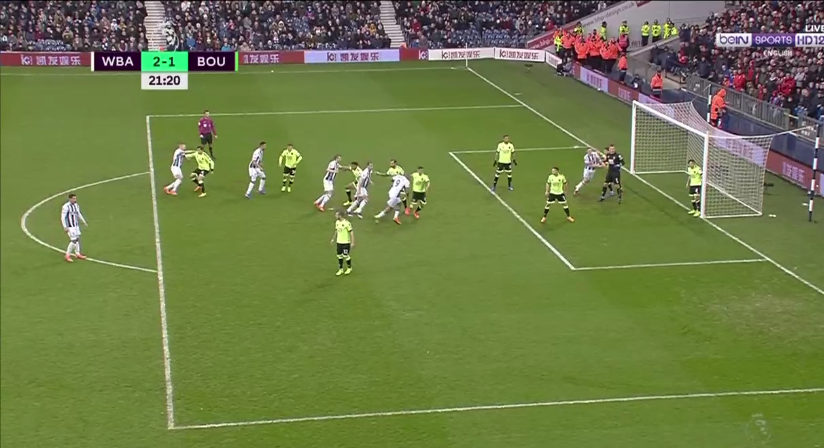 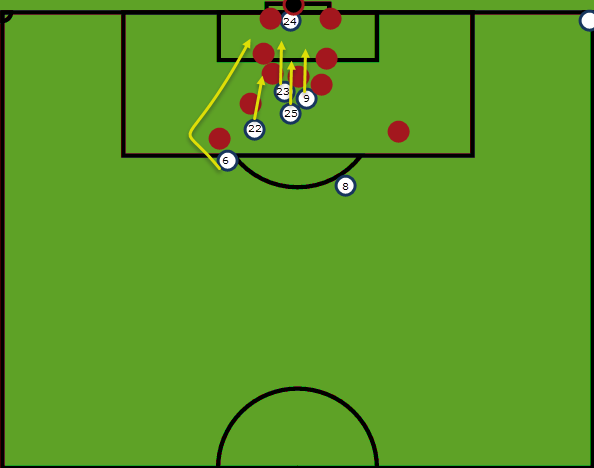 The trio of McAuley (#23), Rondon (#9) and Dawson (#25) along with Chadli (#22) who lurked behind the larger group simply grouped together and made a run to the 6-yard spot with Evans (#6) making a looping run arriving at the back post. Fletcher (#24) kept his role of standing on the keeper, despite being man-marked.

This routine didn’t work as well as the routine for the Arsenal game, with the chance only coming from a fluffed punch from Boruc alongside a lucky deflection after the mistimed punch. Interesting to see some patterns emerging though that we can try to implement in our tactic as closely as possible. 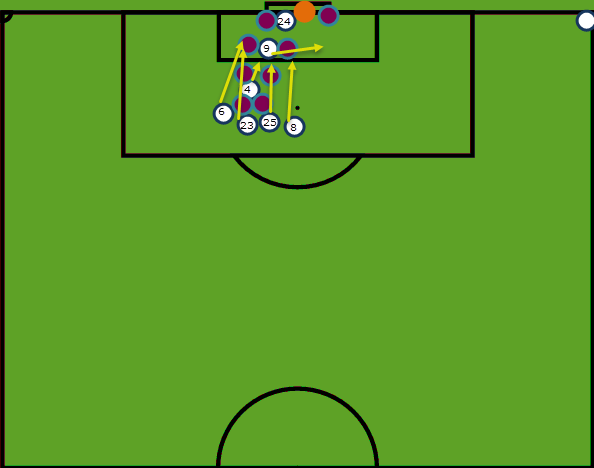 A corner similar in style to the Bournemouth one with shades of some of the others we’ve looked at so far. Rondon (#9) makes a run to the near post with Robson-Kanu (#4) immediately filling the gap left. The rest of the players make runs from deep inwards. Since the corner is again in-swinging the defence will always be on the back foot in a situation such as this due to it being easier to attack a ball from a running towards the goal position than statically and trying to clear it. With the number of runners here, I’m not surprised it ended in a goal for West Brom. 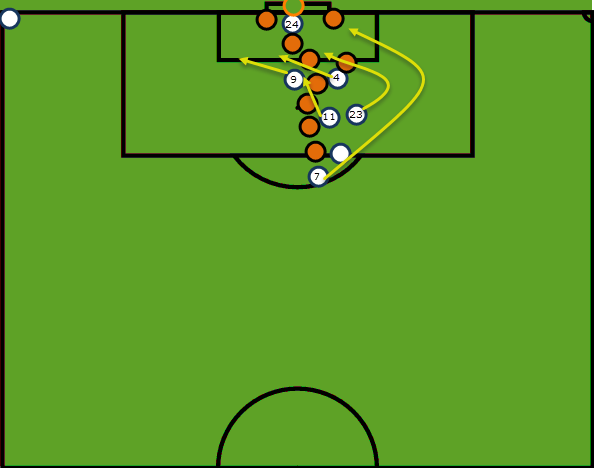 James Morrison (#7) was the player who got the finishing touch on the ball, making a long looped run to the back-post. Rondon (#9) and Robson-Kanu (#4) both made runs to the near post to vacate space for Brunt (#11), McAuley (#23) and Morrisons runs. The positions of the Hull defence is interesting here, but it was apparent the sheer amount of movement caused confusion allowing Morrison to head home.

Whilst West Brom obviously mix up their routine each game, there are a number of constants that we can implement to form the basis of our tactic before filling in the rest:

Next, we ensure that the corner taker is instructed to aim for the 6-yard box. So far, so good! 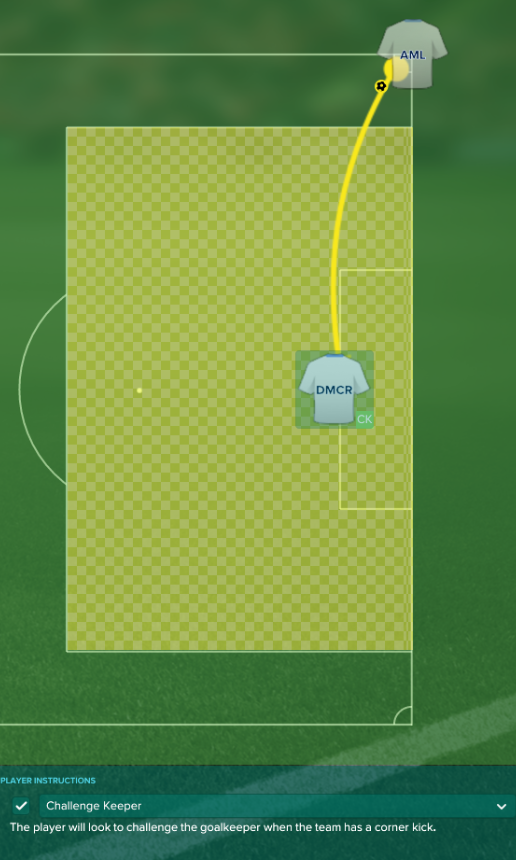 Next up is Darren Fletcher’s individual instructions, set to stand on the keeper. 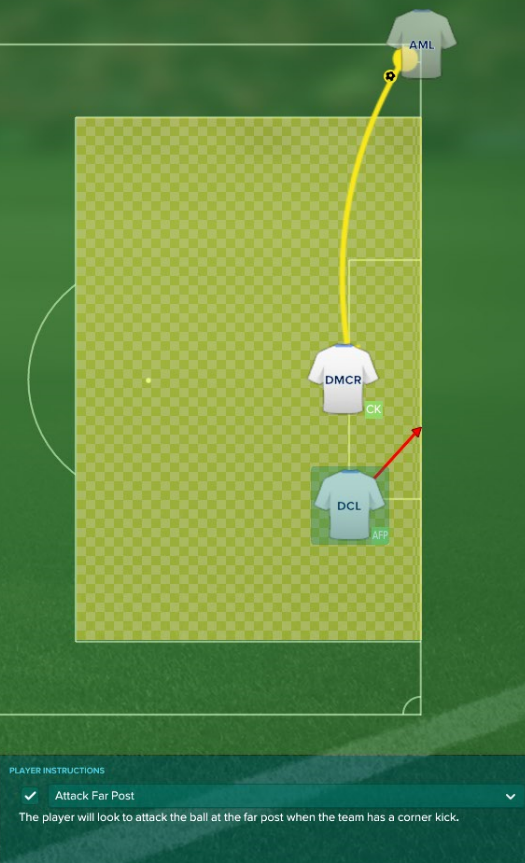 Jonny Evans then instructed to attack the far post. Sadly FM’s set-pieces are still relatively limited, if there was a run from deep to attack far post option, that would be perfect, but this is as good as we get! 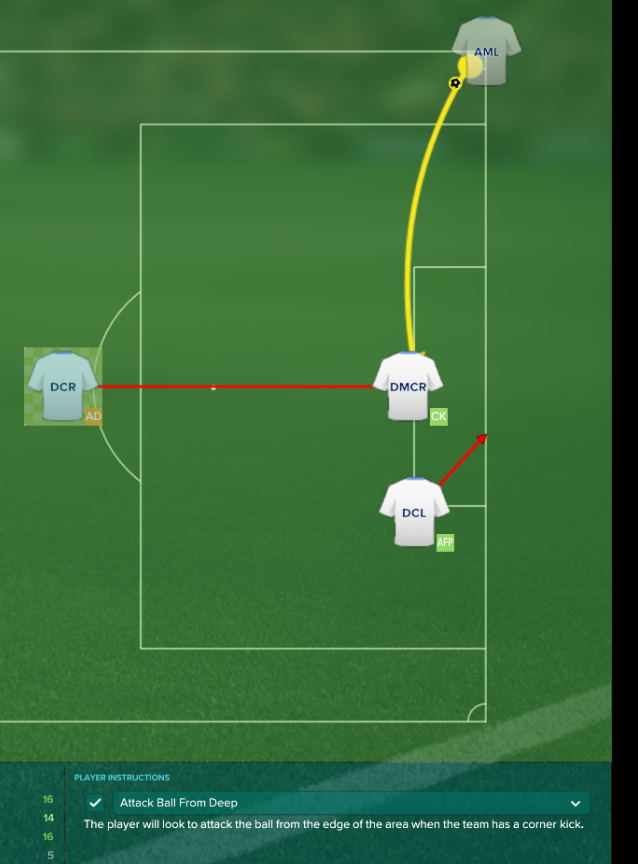 Next is Gareth McAuley who should be getting plenty of goals if the tactic ends up being a faithful recreation. The Attack Ball from Deep instruction looks perfect for him here. 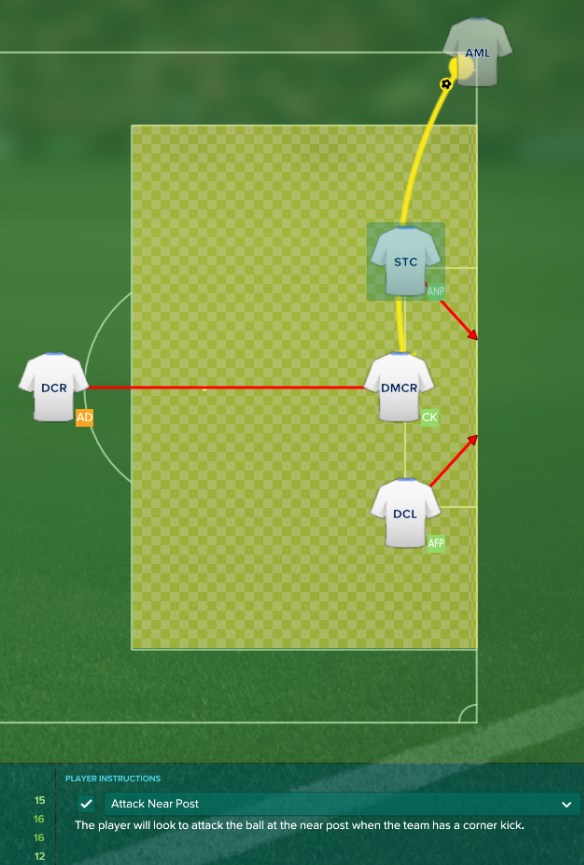 Rondon’s instruction is to Attack the Near Post, whilst we can’t get his virtual self to make the same run as he does on the pitch in real-life this looks to be as close as we can get! 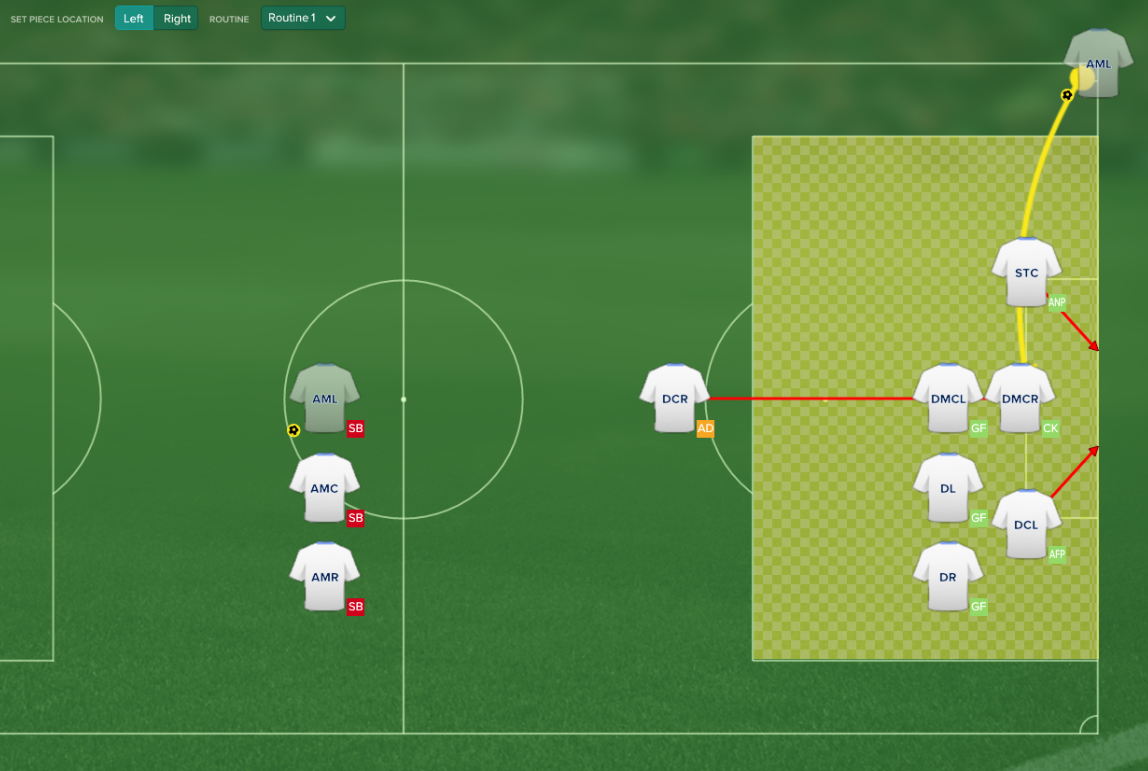 I said above that Pulis normally favours 6-7 players in the box, the above has 4 ending up in the box, so I’ve added another 3 that will go up and hopefully cause problems, with those players being Craig Dawson, Allan Nyom and Claudio Yacob.

Now we repeat the same process with the same instructions for the right-hand side and we’re ready to go!

We can see that the end result is a pretty accurate representation of Pulis Ball, with McAuley ready to make his run from deep, Fletcher standing on the keeper with Evans at the back post. Below you’ll see a video of that said corner:

Whilst the corner itself was ultimately ineffective this time, the players performed what we’d asked of. Now for the big question – does it work? The answer is “sort of”. I played the same season 3 times over to find out and we finished no higher than 4th in the “goals scored from corners” table – however, I was trying to be as faithful as possible to Tony Pulis tactics. I’m sure with some mild tweaking however the routine would be more effective.

Below is probably my favourite goal over the 3 seasons we scored that perfectly represents our routine – a towering header into a danger zone, where someone’s on hand to tuck away with ease.