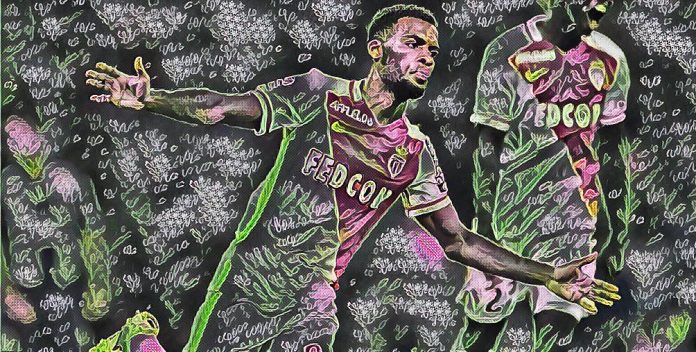 As with many of his AS Monaco teammates Thomas Lemar is hot property at the moment. The 21 year old French attacker has shone whether deployed centrally or on the left hand side for the team with perhaps the most deadly attack in Europe at the moment.

Having made his first team debut at Caen in the French second tier in 2013 it came as a shock to no one when he moved to As Monaco in 2015 as part of the clubs shift in policy towards purchasing young talented players with significant sell on value. As Lemar has represented his country at every level and has now made his first senior appearance his value can only be increasing.

To date this season Lemar has contributed 11 goals and 8 assists over 38 appearances meaning that he has been directly involved in 19 goals or 0.5 goals per game. Those statistics only tell part of the story however with the attacker also 2 dribbles, 1.9 key passes and 1.6 shots per game over those 38 matches.

These statistics for a player who is still so young suggest that he is a key part of their attacking system and a player through which they play in the attacking transition.

There has been significant interest in Lemar this season from a number of different clubs keen to add to their attacking proficiency. He style of play and mental strength suggest that he would be able to adapt to any number of new situations although he may well favour a move to the English Premier League over a switch to La Liga in Spain with Arsenal and Spurs both known to be interested in the young Frenchman.

With that said however there is nothing to say that Lemar will choose to not stay with Monaco for at least another two seasons. The quality of French football as a whole is on the rise and Monaco have a young side that plays to the strengths that Lemar possesses. He is well thought of at the club and is already viewed as a leader amongst the squad at his relatively young age.

How does he look in Football Manager 17 though? 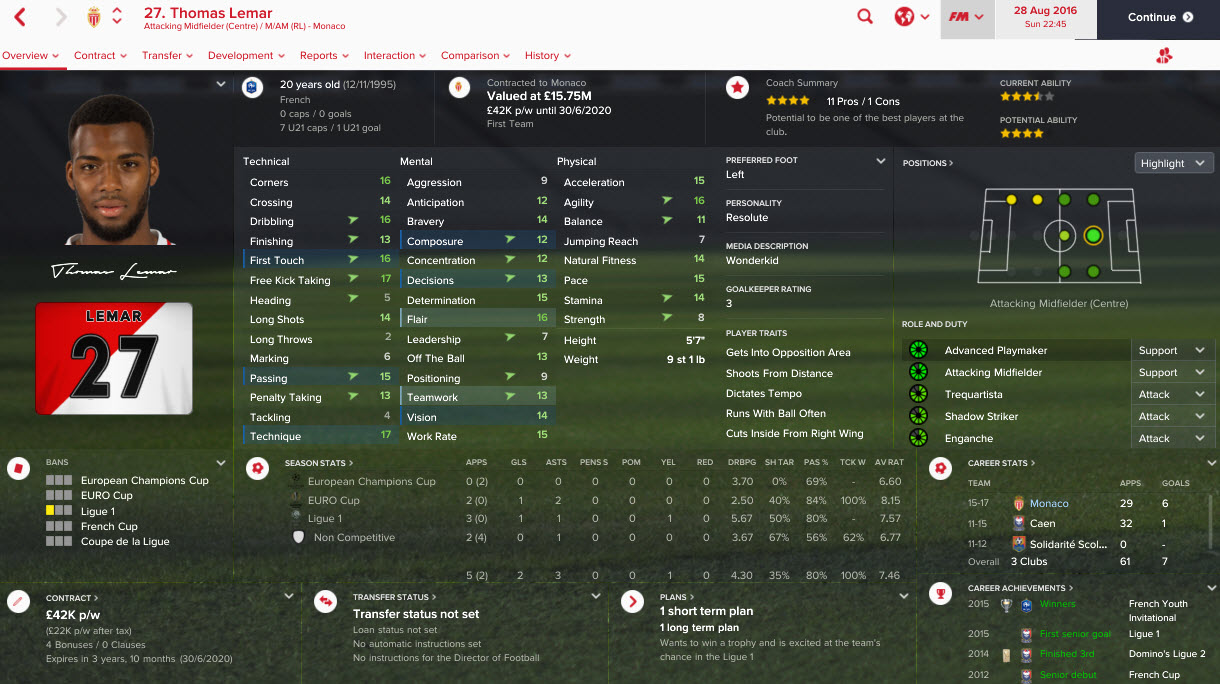 Well, there you have your answer, superb. He is already rated as a wonderkid and with good reason. Look at his technical attributes to begin. 17 for technique and free kick taking and 16 for corners, dribbling and first touch. Then 14’s for long shots and crossing. Already we can see that Lemar is going to terrify defenders in the final third.

His mental attributes also impress. 16 for flair. 15 for determination and work rate and then 14 for bravery and vision. He rounds that off with 13 for decisions, off the ball and teamwork.

Finally the physical side of the game. 16 for agility and 15 for acceleration and pace.

Ability in one on one situations

One of the strongest areas of Lemar’s game is his balance and ability to beat the opposition player in one on one situations.

He is very much a modern attacker in his ability to shift the ball to the left or to the right with equal effectiveness. This makes him extremely difficult to defend in central areas of the field unless the opposition is able to commit numerous defensive players to cover him.

When wide left or wide right Lemar has the ability to go down the outside or cut back inside towards the central areas. 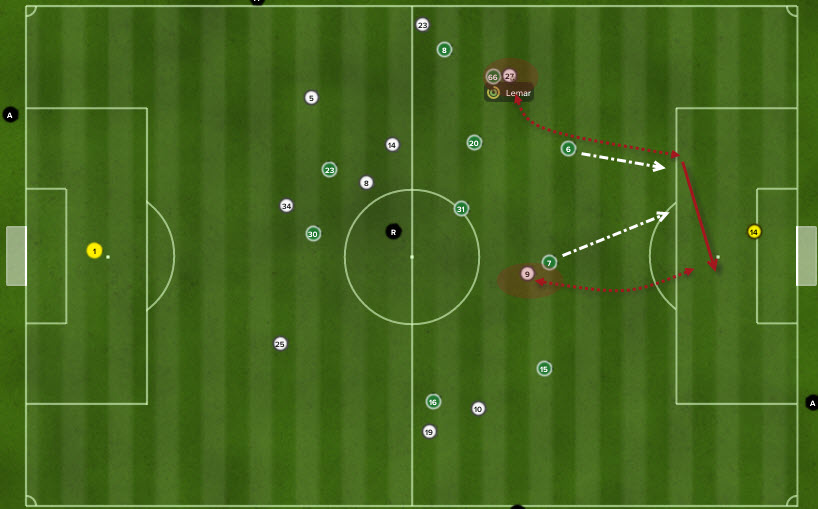 Here Lemar has picked up possession of the ball in the left half space with limited supporting options. Falcao is on the far side of the central vertical lane and Bernardo Silva is in a wide right position.

Instead of hesitating and waiting for support to come Lemar simply takes the initiative on himself to run at the defensive line. He immediately engages the other defender along the outside and in doing so drags two defensive players over towards him.

This movement allows Falcao to drift off in to space and mirror the vertical run of Lemar. When the chance presents itself Lemar simply squares the ball for Falcao to finish. 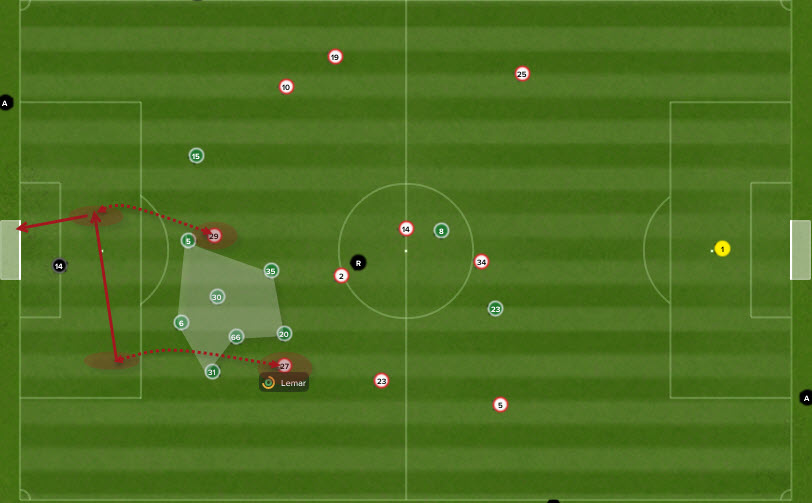 Again Lemar takes possession of the ball in a relatively isolated position. He has a defensive block of seven players between him and the ball and Kylian Mbappe is the only player in a supporting position.

Once more we see Lemar take the opportunity to drive at the opposition defence and he goes through the defensive block at pace leaving them in dissaray.

Mbappe meanwhile has made an attacking run to the back post and as the ball comes across from Lemar it leads to an easy finish.

The in-game representation of Lemar mirrors his real life appearances nicely. Here for example he picks the ball up in the left half space and immediately looks to attack the central area of the field.

While Lemar is able to drive with the ball at his feet in to space he also has the ability to identify the correct time to release the ball to play his team mates in to space beyond the defensive structure of the opposition.

Whilst Lemar is best known as a wide player the way that he drifts in to central areas of the pitch is reminiscent of the Brazilian midfielder Coutinho and he has a similar eye for a passing lane through compact defensive blocks.

In time we should see Lemar move infield in to a more conventional number ten position where his ability to play in 360 degrees would cause maximum damage. 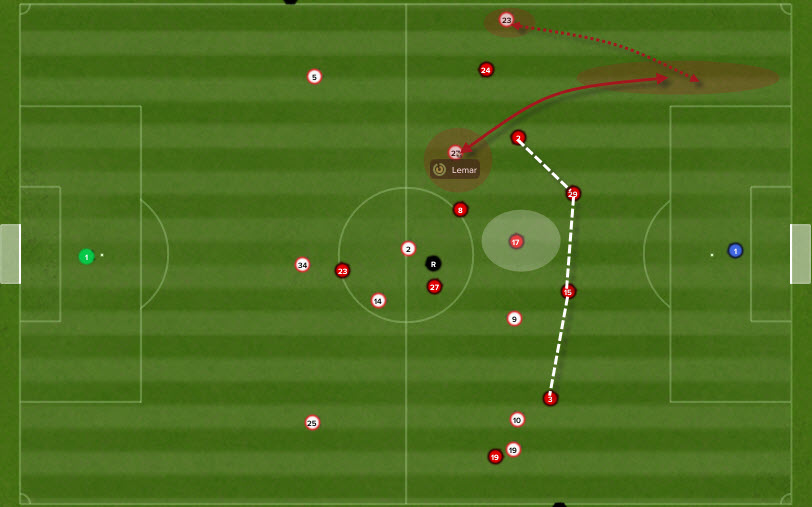 Here Lemar picks the ball up in the left half space in a pocket of space with little in the way of immediate pressure.

The opposition back four is relatively narrow and the right back has been drawn out of position towards Lemar breaking the integrity of the defensive line.

Instead of running with the ball Lemar identifies the left flank and the fact that Mendy is advancing forward in to the space from left back. An immediate pass out in to space plays Mendy around the back of the defensive line. 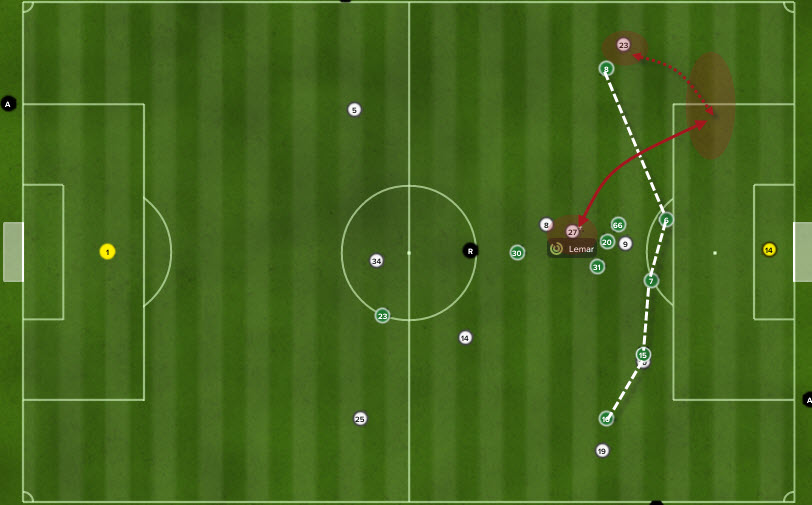 This time Lemar takes possession of the ball in the central area.

The opposition are using a three man defensive line with wing backs covering the wide areas. You can see three opposition players sitting narrow in the central area blocking the route to goal for Lemar.

Once again he sees the space in the wide left area behind the defensive line and the pass is played out in to the wide area.

Again though the behaviour of Lemar within the match engine is matched by what we see from him on the pitch.

As Lemar takes possession in the left half space the opposition has narrowed off in front of him and we see Mendy in the left back role advancing along the outside.

Lemar chooses the right moment to weight the ball in to the path of the left back to allow him to get around the defensive line of the opposition.

Movement and composure around the penalty area

As well has being able to commit opposition players with his ability on the ball and identify space and movement around him to cause maximum damage to the opposition with his passing range Lemar is also a threat himself in the penalty area. 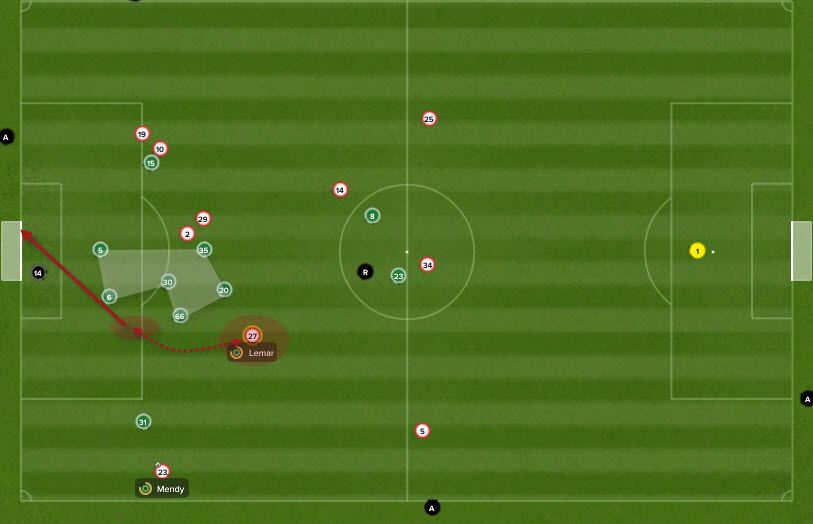 Here Lemar has possession of the ball with the opposition in a deep block between him and the ball, There are two players attacking the central area who in effect pin the defensive structure to that side of the penalty area.

Lemar immediately takes the ball and drives forward at the opposition getting in to a pocket of space and finishing with an excellent shot across the face of the goalkeeper in to the far corner of the net. 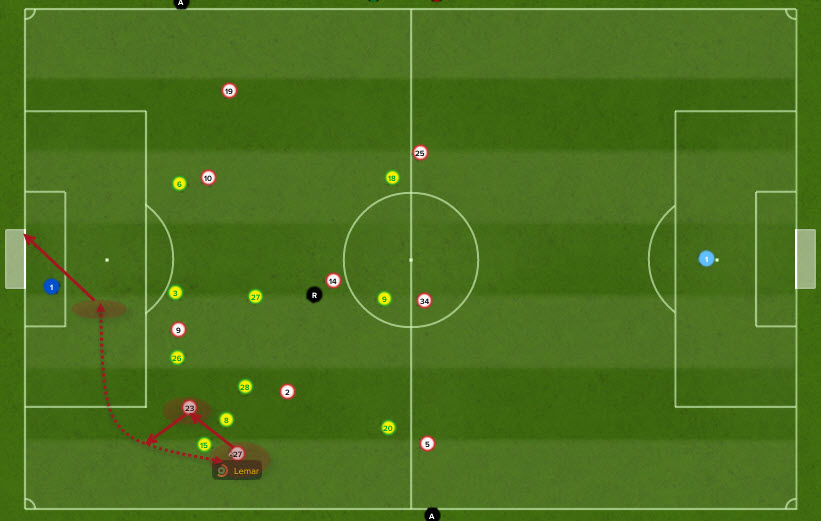 Here Lemar has the ball out in the wide left area with three opposition players looking to cut him off and prevent him from driving for goal.

Mendy has advanced beyond the ball and inverted slightly in to the half space, Lemar plays the ball through the defensive line before continuing his run around the defensive block.

He picks the ball up on the other side before driving in to the box and again finishing across the face of goal. 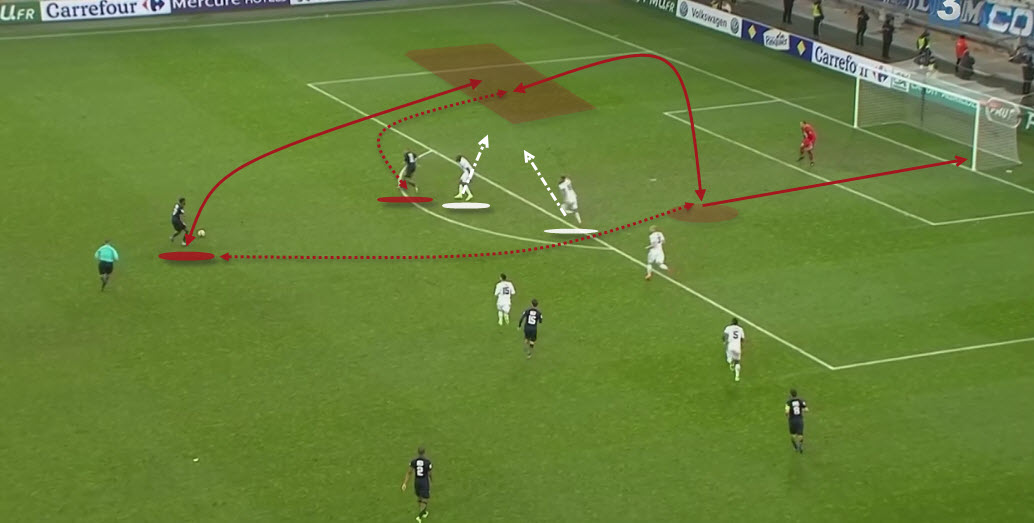 Here we see Lemar playing for Monaco with the ball in the central area. Instead of simply driving in to the central area he pauses and waits for the advanced player to make an angled run along the side of the defensive structure.

Lemar plays the ball in to space for the advanced player as the defensive block shifts across to cover the pass. This allows Lemar to continue his run in to the central area before picking up the pass and finishing confidently.

There is no little doubt that Thomas Lemar is one of the premier attacking players in the game this year. His relative young age means that he can become the focal point of your attack for years to come.

With the ability to link play, pass intelligently and even finish chances all on his own there is nothing that Lemar cannot do.

Pick him up quickly before his price is driven out of your reach.