Home Football Manager 17 Beyond the Stats 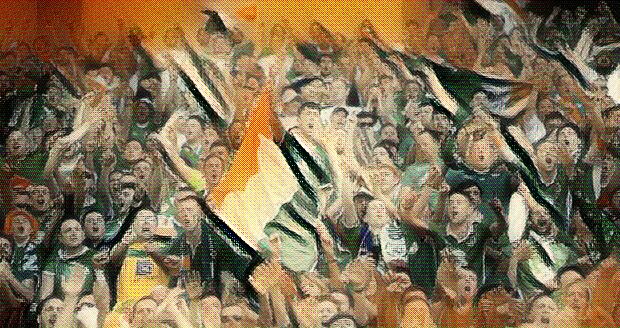 The Irish & the Intangibles

Football Manager is the most realistic simulation of football that we can immerse ourselves in. While FIFA is beginning to seem more realistic than The Beautiful Game itself, our micromanagement of players does not allow them to be themselves in the same way they can be in FM. Ultimately though, FM is a game of numbers, running them through algorithms to calculate outcomes through which we can influence and try to influence the numbers to be more favourable to us than the computer.

American sports are statistically driven, with players analysed to minute details. However, the experts always talk about the details that cannot be analysed, The Intangibles they call them. Heart, focus, mentality to name but a few. Our beloved sport is adopting some of these Americanisms. Football Manager itself can often be hard to decipher with the ever-increasing availability of statistics and analysis in the game. Those who seem to suffer the most are the British & Irish players, a culture of footballers who masked technical weaknesses with mental strengths, The Intangibles to quote the Americans (Granted, at the time of writing Barcelona had not yet done the unthinkable against PSG with no British players). So, with the ever influx of foreign talent in British football, will clubs continue to scour the world for talent, or will the Brexit fears return British football to its island roots? 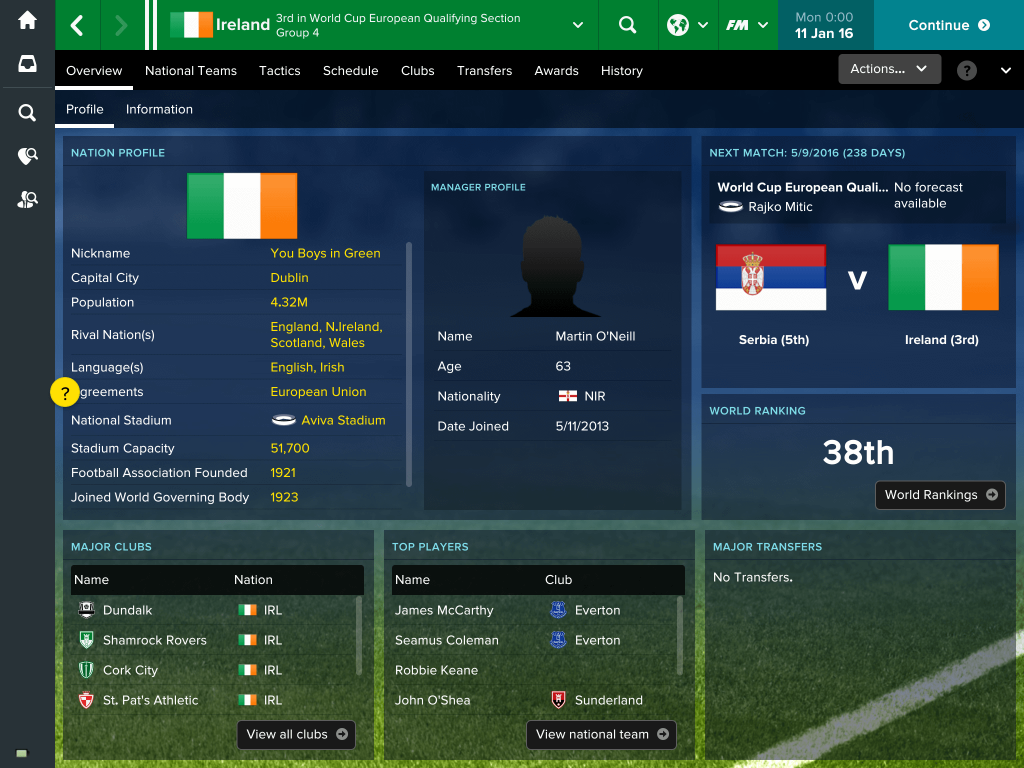 As a small nation, right out on the Western extremities of Europe, we as a people have managed to find ourselves up every hill and down every valley on the planet. At the establishment of formalised football and the F.A. in England, the first generations of Football League clubs had Irish influences right the way through, from management to playing staff. Through the generations, the presence of us Irish (alongside players from other Home Nation & Commonwealth nations) has been obviously noticeable in all sides. Again, our sense of adventure didn’t stop us in a footballing sense either when you look in recent times at the commemorations at FC Barcelona & Real Betis for Irishman Patrick O’Connell. O’Connell managed to find his way to Seville and lead Betis to the Spanish title in 1936 before rescuing Barcelona and turning them into a successful club during Franco’s rise to power in Spain.

The Golden-era of Irish football came in the late 1980s, when English World Cup Winning defender Jack Charlton exploited the Grandparents rule to flesh an Irish squad out and bring us to our first 3 tournaments between 1988 & 1994. When players before such as Brady & Giles were technically proficient individuals, Brady lining up for Arsenal & Juventus Giles for a dominant Leeds in the 1960s & 70s, it was the never-say-die Irishmen who made their name at this time. The successful Liverpool & Everton sides had strong Irish backbones to their squads, these players doing the same at the national level.

Yet, with the arrival of the Premier League, just like most sides the Irish players dropped out of top end squads. Where players like Roy & Robbie Keane, Denis Irwin, Damien Duff & Shay Given did make big names for themselves in the PL-era, current PL sides have turned away from us. Burnley have brought in Robbie Brady & Jeff Hendrick since their promotion to the PL, who coincidentally played for the same schoolboy team in Dublin (I know, I played against them), Sunderland have relied upon Mr Versatile John O’Shea despite his advancing years. These players, among many others like Shane Long, Glenn Whelan, Seamus Coleman & James McCarthy may be technically limited players, however it is their drive and effort that have made them stand out from their peers. Their physicality and mentality may shine through on Football Manager, but in many regards, their technical limitations hinder their progress into the upper echelons of world football. 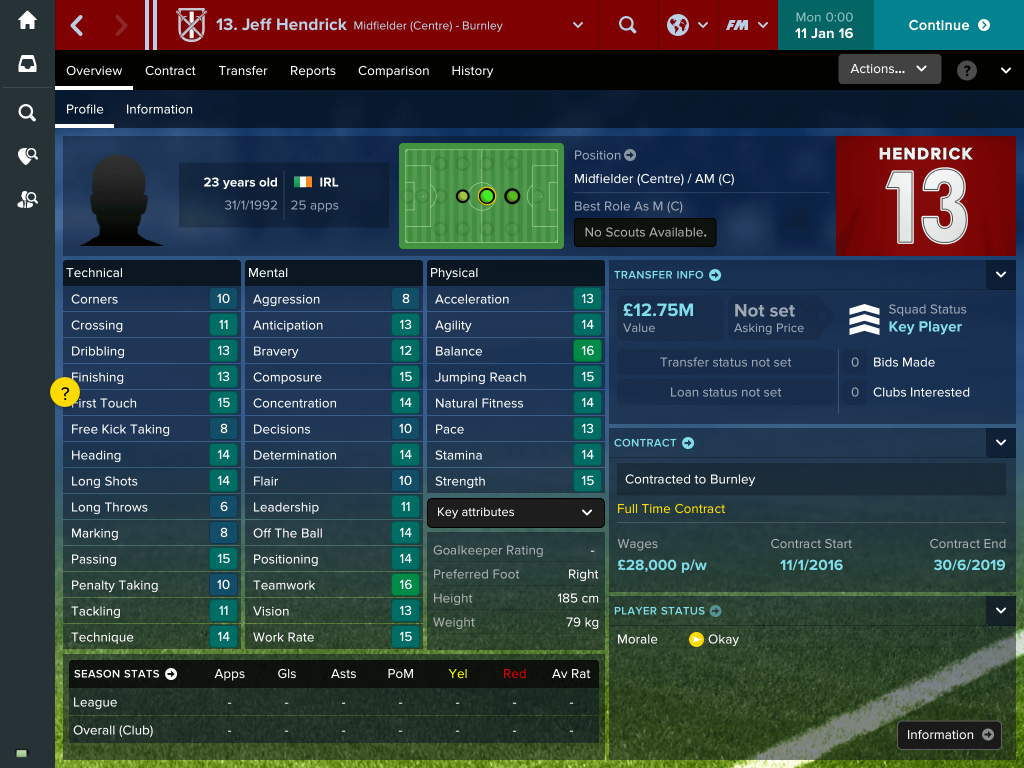 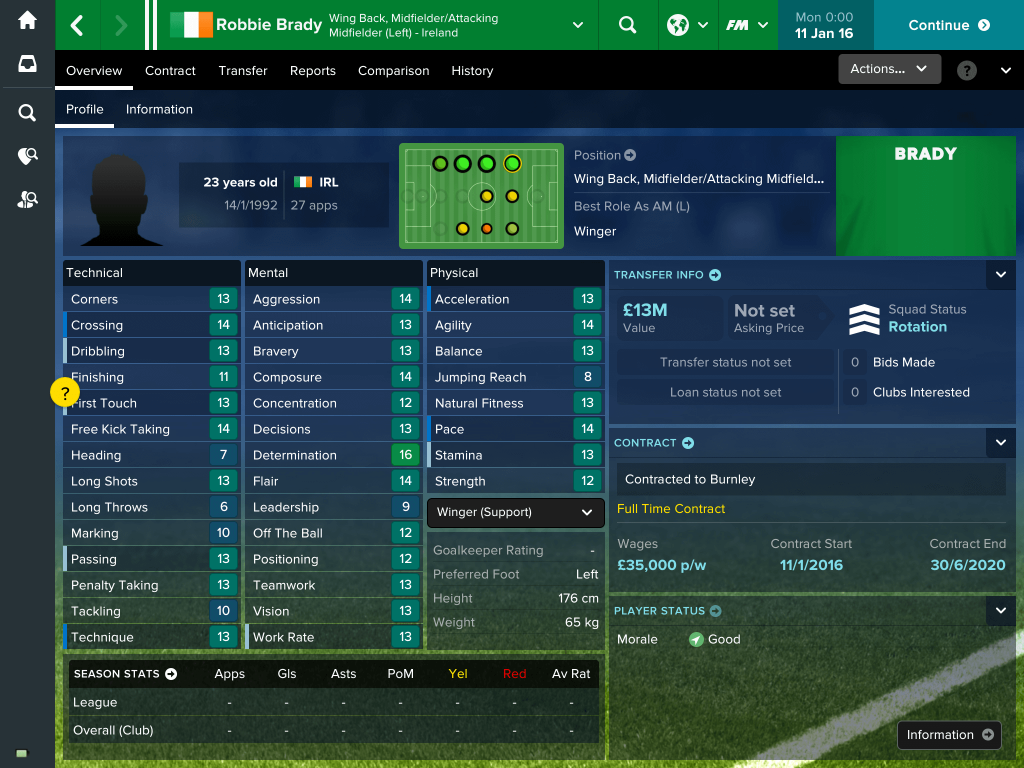 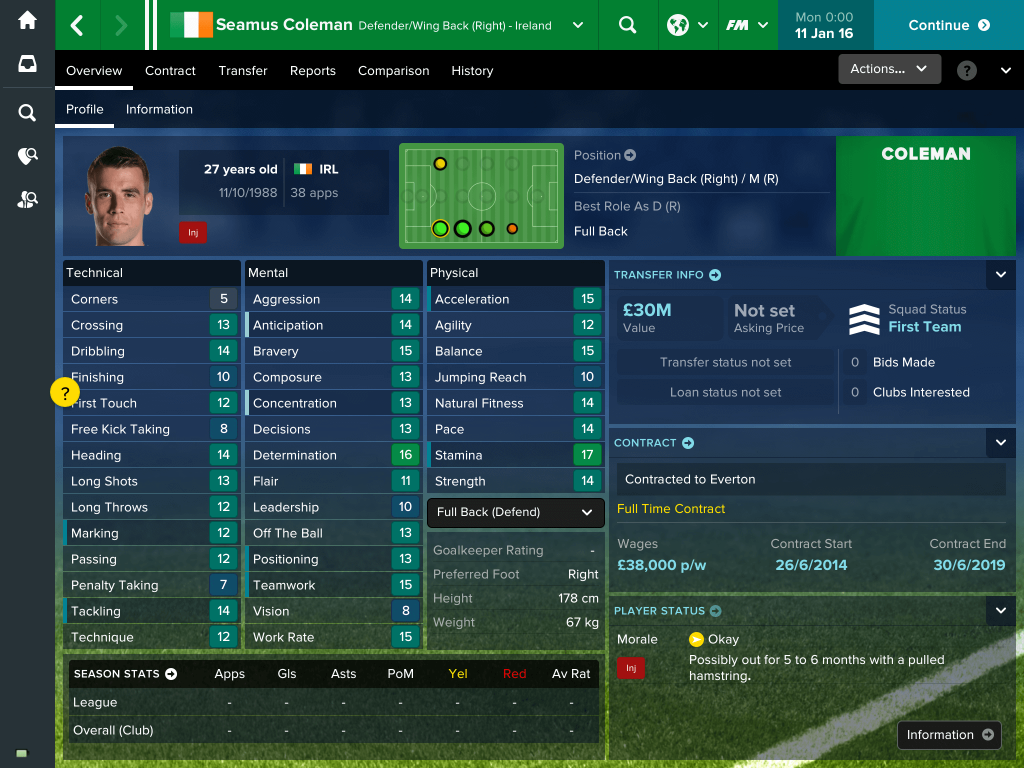 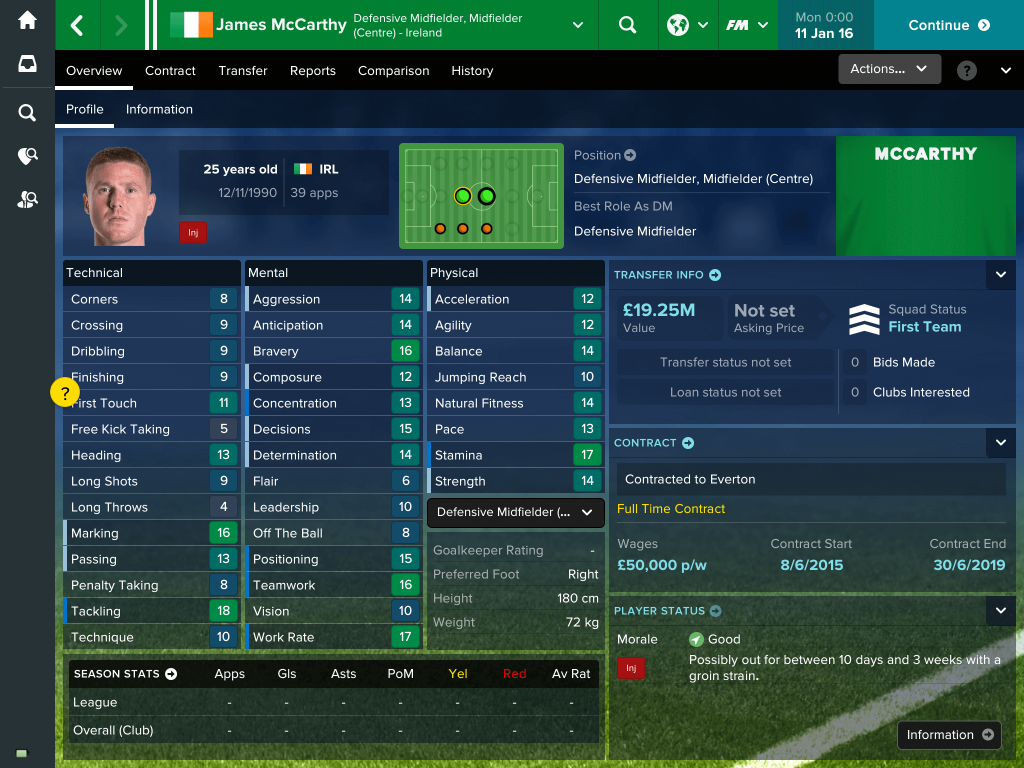 When you look at domestic Irish football has never had much of a rich background. Our modern game is riddled by financial insecurities, where lucky players sign contracts that start just before the first game of the season before ending not long after the final game of the season. When the CEO of the organisation earns more than the Premier Division winners, our domestic game is in a weak state of affairs. The current rise of Dundalk comes not long after the club faced bankruptcy in Ireland. Their rise has also mirrored the falls of Shelbourne to almost insolvency, Bohemians almost to the same fate. Clubs are so financially restricted that club facilities and stadiums are crumbling around the fans themselves. Dundalk’s recent European home exploits came at Tallaght Stadium, 99km away from their home of Oriel Park. Much of their financial winnings from the Europa League has been invested in repairs for their stadium. For anyone to manage an Irish club in Football Manager for the first time, the fact that some non-League teams in England have better facilities than League of Ireland clubs is eye-opening, especially considering the fact these Irish teams can reach the Champions League.  Though Dundalk’s European run is not the first time an Irish team has enjoyed a European run, in the modern-era of the rich getting richer in football, the rise of these sides has been greatly enjoyed in Ireland, though masking our domestic struggles. 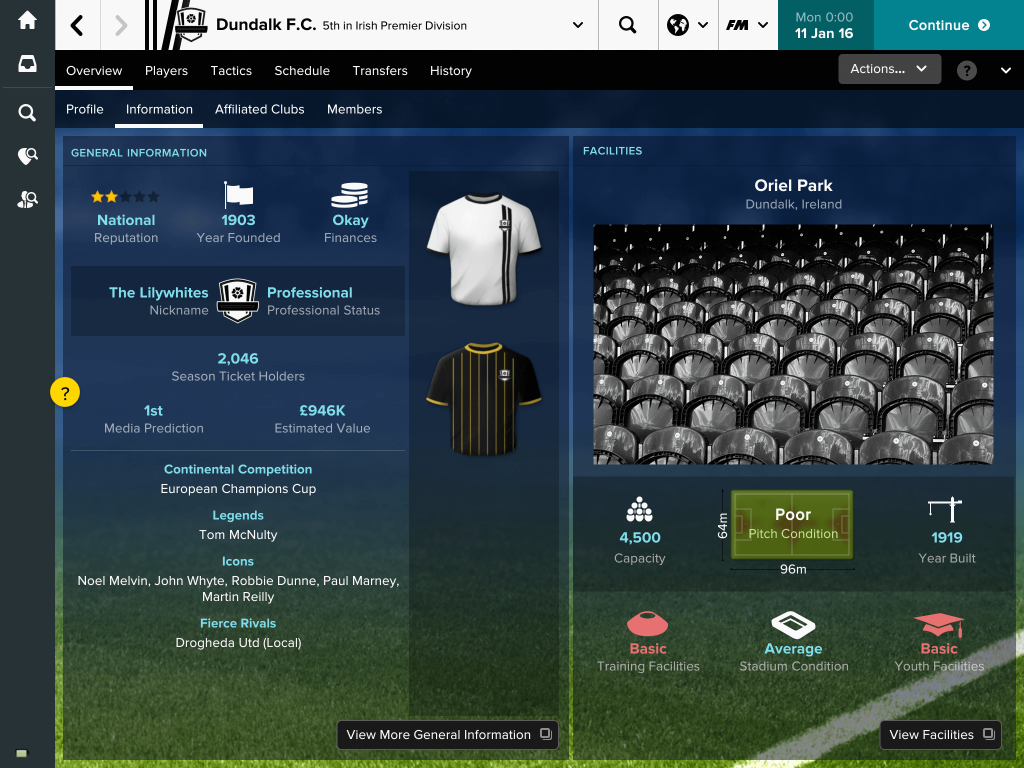 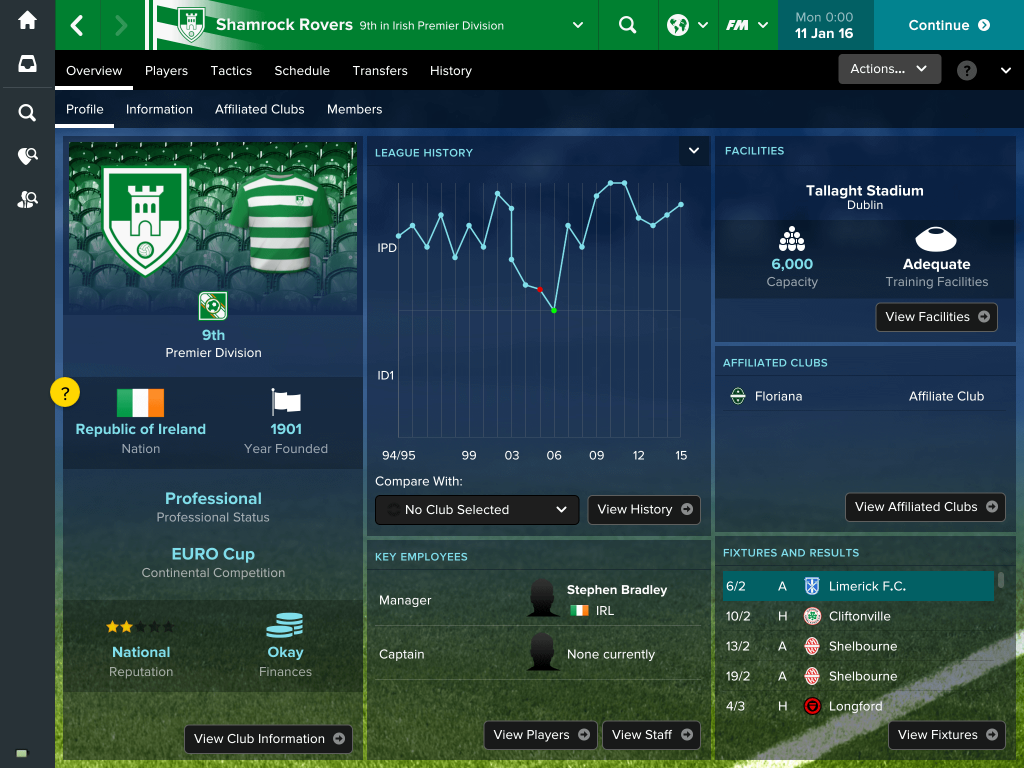 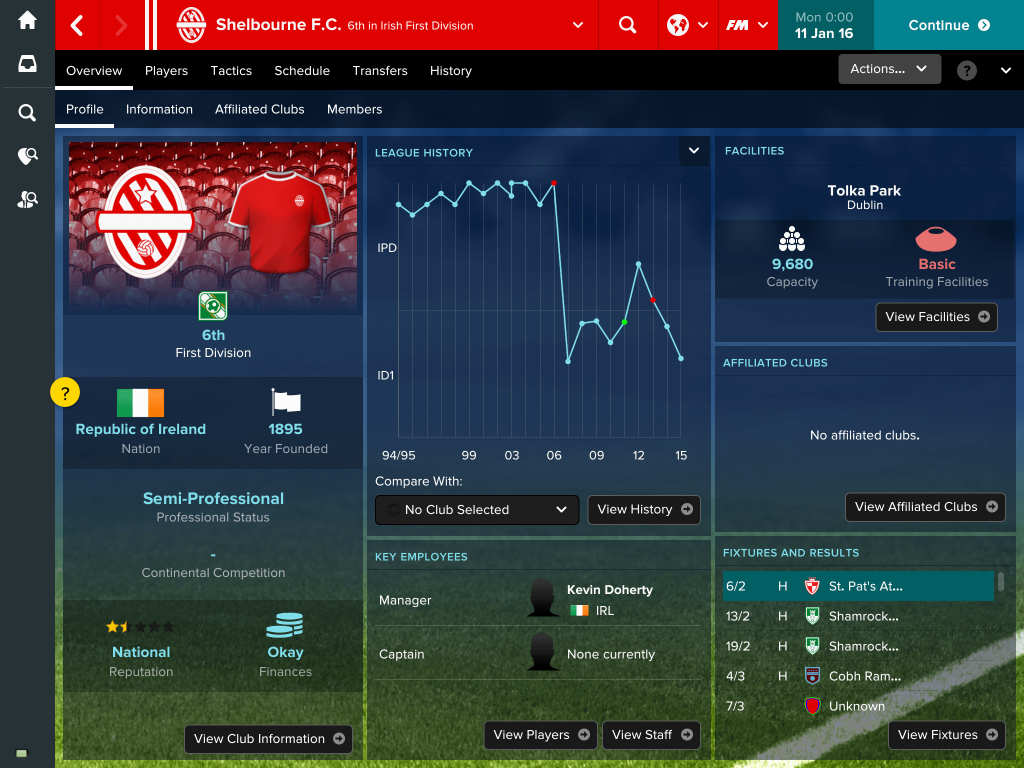 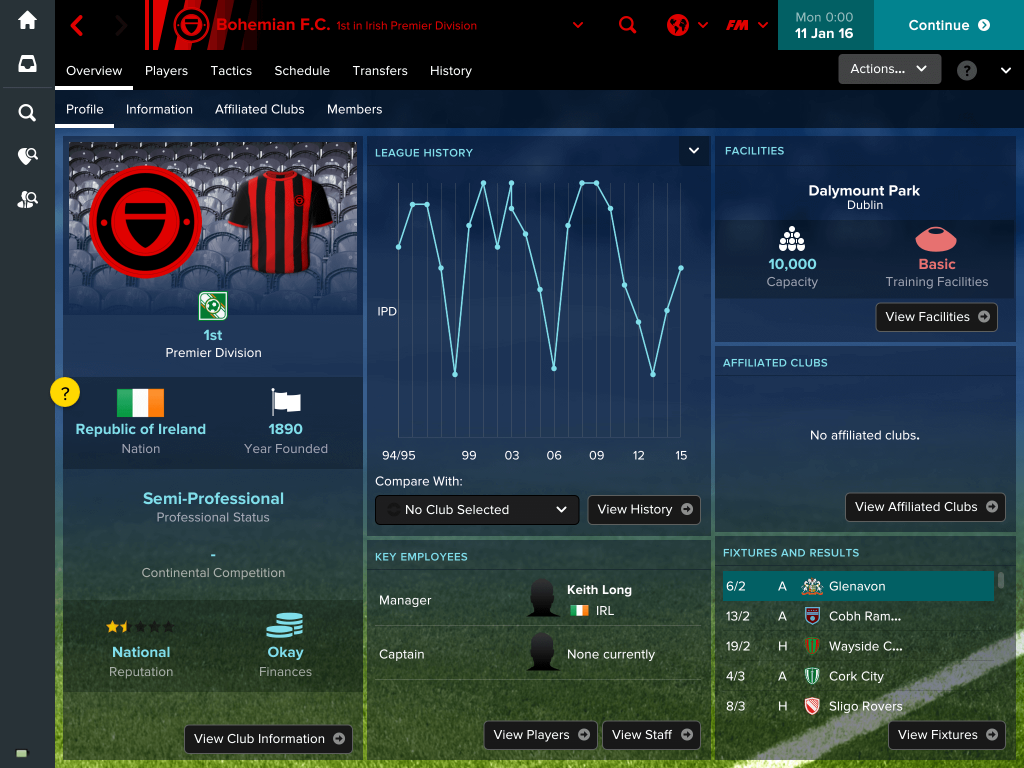 The drive of Irish young players is always to make it to British football sides. Much to the annoyance of the loyal domestic game fans, British football continues its lure to Irish youngsters. Recently, a 17 year-old from my hometown of Tallaght signed a professional deal with Liverpool in news that was met with great support in the community. When the domestic game is the fall-back for many players who fail to make it in Britain, the drive is in them not to return, not because of the lack of support in Ireland for our local teams like can be seen in England, it is the financial security that making it professionally can make. We have the drive to make it, no matter how long it takes. Wes Hoolahan has shown this recently, Chris Forrester & Conor Hourihane (VR Fussball’s man in his save) making strides up the leagues with their current sides.

In Football Manager, a game ruled by the numbers, The Intangibles may not be a considerable factor in the game. The League of Ireland is an exciting league, despite the obvious financial limitations. For anyone considering a Football Manager challenge, take over an Irish team and try to put together a European drive. Talents like Coleman, McClean, Long started their stories in the League. Daryl Horgan at Preston is now our latest hope from the domestic game. However, you will see with Irish players and Irish clubs that any weakness will be overlooked and be seen as a challenge. As a nation, we have a mentality not to let the odds determine the outcome.  This St. Patrick’s Day, go green on FM and see that Ireland has the potential to be a save that you will enjoy. Sure, you’ll be made to work hard, but with the luck of the Irish at your side and the wind at your back, who knows where the journey may go. Or maybe that Irish player your scouts have been telling you about is worth the chance. Who knows, he may just be the rub of the green your side needs!