As it stands, Chelsea are on course to win their second Premier League table in three seasons after establishing a ten-point lead at the top of the table.

The race for the finish in the top four is heating up with a number of teams in contention. Just one point separates fifth from second with Arsenal, City, Liverpool and Tottenham all in the mix. Manchester United and Everton are hot on their heels and pose a late threat to the European places.

At the other end of the table, the battle for survival is also too close to call. Sunderland are currently bottom of the table, but anything could happen with six teams all not clear of danger – including reigning champions Leicester.

Using Football Manager 17, we attempt to predict how the Premier League table will play out. Who will be crowned champions? Who will reach the Champions League? And who will be relegated to the Championship?

The appointment of Sam Allardyce was not enough for the Eagles who were relegated to the Championship following a dreadful season. ‘Big Sam’ was given the boot in March after failing to improve the team’s fortunes. He was replaced by former Barcelona manager, Gerardo Martino, but the Argentine could not save them from finishing bottom of the pile. It’s hard to see the Eagles holding on to players such as Christian Benteke and Yohan Cabaye in the second tier of English football.

Premier League newcomers Middlesbrough were unable to beat the drop following their return to the Premier League. £100,000 per week striker, Alvaro Negredo, was one of the team’s worst performers and Boro’ lack of goals cost them in the hunt for surivival. Aitor Karanka was replaced by Roberto di Matteo but the Italian could not keep his new side up.

After somehow avoiding relegation season after season, Sunderland finally returned to the Championship. David Moyes almost steered them to safety but couldn’t overcome Chelsea on the final day of the season which sealed their fate. The goals of Jermain Defoe proved to be useless as the rest of the squad failed to pull their weight. Moyes was able to keep his job and will attempt to steer the Black Cats back to the Premier League next season.

When Hull replaced Mike Phelan with Marco Silva, critics suggested that the Portuguese manager would struggle despite his impressive record as Olympiacos boss. Silva defied all the odds and secured Hull’s safety due to a much improved second half of the season. Lazar Markovic impressed during his short stay on loan which guided the Tigers to safety by just one point.

Thankfully for Leicester, they were able to stave off the threat of relegation to avoid the embarrassment of going down as reigning champions. They were knocked out of the Champions League knockout stages which saw an improvement in their league form. Crucial wins over Liverpool and Manchester United were pivotal. Claudio Ranieri resigned from his role and was replaced by Guus Hiddink who kept the Foxes up.

Paul Clement was able to pull off the impossible and guide Swansea to safety despite some horrendous form under Bob Bradley. The ex-Bayern Munich assistant manager got the Swans playing again which comfortably kept them up. Fernando Llorente and Gylfi Sigurdsson were crucial to their success while the signings of Tom Carroll and Luciano Narsingh proved to be astute January purchases. Bizarrely, the Swansea board decided to sack Clement and search for a new manager at the end of the season.

Burnley secured Premier League safety for another season due to their remarkable home form. Sean Dyche made Turf Moor a fortress, and despite their troubles on the road, it was enough to keep them in the top tier for another season. Their modest budget proved to be no problem as Andre Gray finished as the club’s top goal scorer. January signing, Ashley Westwood, proved to be a good piece of business but Joey Barton found himself transfer-listed after re-joining the club.

After some shaky form towards the halfway stage of the season, Bournemouth’s fortunes improved as they comfortably secured a mid-table finish. Despite losing star striker Callum Wilson, Eddie Howe’s men performed admirably and went on a seven-match unbeaten streak towards the tail end of the season; which included impressive wins over Chelsea and Tottenham.

West Ham could only manage a 12th place finish after selling Dimitri Payet to Marseille. Following his sale, West Ham endured some awful form. The Hammer went 12 games without a win meaning Slaven Bilic lost his job. Marcelo Bielsa replaced him and improved the side’s performances. They returned to winning ways but could only finish in the bottom half of the table to end a disappointing campaign.

EFL cup finalists, Southampton, finished in 11th as their attentions turned to a dream trip to Wembley. Unfortunately for the Saints, they were beaten 3-0 by Manchester United in the final which ended their dream run. Manolo Gabbiadini finished as the club’s top goal scorer, proving to be a bargain January transfer from Napoli. Claude Puel’s first season in charge was solid but will the Saints be able to keep hold of their star players?

A late charge towards the top four for Everton eventually fizzled out and some lethargic performances saw the Toffees fall to 10th in the table. Ronald Koeman’s men picked up just one win in their final 12 games of the season meaning they slipped out of the race for continental qualification. Romelu Lukaku was the club’s top performer and interest in his services will be high after another stellar campaign.

Moving into the top half of the table, Watford secured a ninth-place finish thanks to the goals of Troy Deeney and M’Baye Niang. The on-loan French striker had an instant impact in England and struck up an excellent partnership with the Watford skipper. Walter Mazzarri was rewarded with a new contract following a decent season for the Hornets.

Stoke also enjoyed a decent season, ending up in 8th place. Stoke’s signings slotted in seamlessly in both the summer and January. Joe Allen was named the Potter’s Player of the Season following his move from Liverpool while Saido Berahino netted ten goals following his switch from West Brom. Mame Diouf enjoyed a strong second half of the season which propelled his side up the table.

Tony Pulis left West Brom pushing for European qualification places in the Premier League following a superb season. Pulis was given the England job as the FA decided that Gareth Southgate was not the right man to lead the Three Lions. Surprisingly, Alan Pardew was appointed by the Baggies but kept them on track and ended the season in 7th; securing Europa League football at the Hawthorns.

In spite of all their transfer spending, Manchester United could only lumber to a sixth-place finish in the Premier League; missing out on Champions League football again. Paul Pogba, Zlatan Ibrahimovic and Juan Mata all ended the season with more than 15 goals but United’s form suffered as a result of a Europa League cup run. The Red Devils reached the final but were beaten by Inter Milan.

Liverpool’s poor form at the start of the calendar year proved costly as Jurgen Klopp’s men missed out a top four finish after initially challenging for the title. Another defeat against Leicester sparked an upturn in their form but draws against Stoke and Watford in their run in meant Klopp would have to settle for Europa League football at Anfield.

Tottenham will get another chance in the Champions League after a fourth place finish. Spurs slipped out of the race for the title following some dreadful defeats to Bournemouth and West Ham. Mauricio Pochettino will be pleased with his young side’s performances throughout the season, especially Dele Alli who was crowned PFA Young Player of the Year for the second successive season.

Arsenal pipped their North London rivals to third by just one point as Arsene Wenger continued his impressive record of finishing in the top four. The Gunners were unable to mount a serious challenge in the Premier League title race but reached the semi-final of the Champions League only to fall short against Atletico Madrid. Mesut Ozil was their most impressive performer as the German enjoyed an excellent second half of the season.

Pep Guardiola could only guide Manchester City to second place in his first season at the club; finishing six points behind league winners Chelsea. Sergio Aguero was the key player, finishing at the league’s top goal scorer. A return to fitness from Vincent Kompany also improved their performances as they charged up the table in the second half of the season. Guardiola also won the FA Cup after the Citizens beat Newcastle on penalties.

Unsurprisingly, Chelsea could not be caught and secured the Premier League title in devastating fashion. Antonio Conte transformed the Blues into an unstoppable force, delivering another Premier League crown in his first season. He managed to get the best out of Diego Costa and Eden Hazard but it was N’Golo Kante who averaged the highest average rating over the course of the season. Conte was deservedly named the manager of the year and Chelsea go into the new season as favourites to retain their crown. 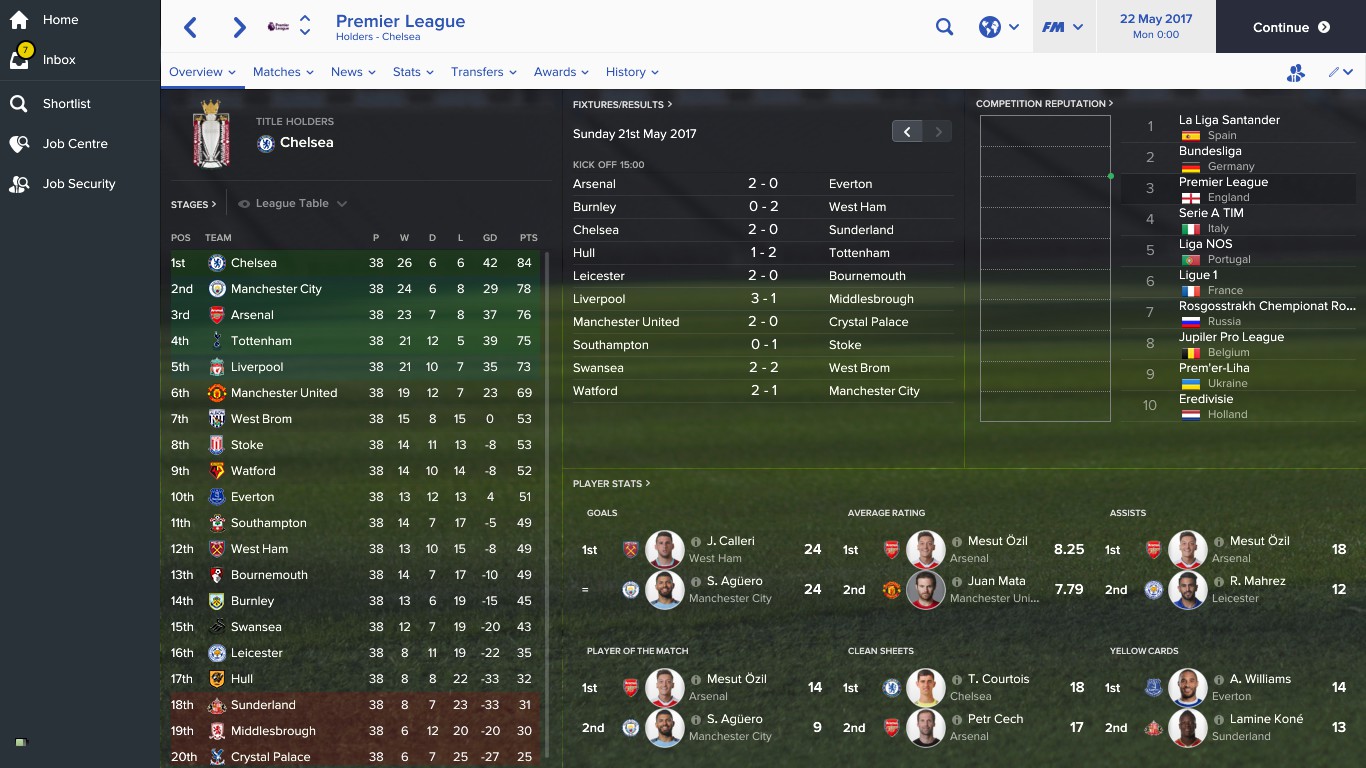 Who do you think will win the league this season? Who will finish in the top four? And who will be relegated? Comment below!