At first glance the squad I took over was bloated, particularly in midfield. But let us start at the back in goals we had a solid shot-stopper in Craig Gordon and reasonably good back-ups. Injuries to the centre backs meant calling both Eoghan O’Connell and Jamie McCart up to the first team – both done very well. At full back we are set, however both Mikel Lustig and Emilio Izaguirre now the wrong side of 30. Kieran Tierney looks set to cement his place in Celtic history providing I can keep hold of him.

In the centre of midfield we are overflowing. My starters are Scott Brown, Stuart Armstrong and Tom Rogic. Then we have the likes of Nir Bitton, Callum McGregor and Liam Henderson and Kris Ajer. On the wings I feel spoiled for choice. We have class acts like Scott Sinclair and Paddy Roberts, deputised by Ryan Christie and Liam Henderson.

Up top it’s a straight shoot-out between Leigh Griffiths and Moussa Demebele. We also had Nadir Ciftci but he is below the youth players in the pecking order.

I brought in Diego Poyet and loaned him out to Hearts in a bid to strengthen them for the Europa League qualifiers. They fell at the final hurdle and Poyet was used sparingly the first half of the season so I recalled him and will be looking to send him elsewhere.

Then in came Thulani Serero form Ajax for a cut-price £600k. I lacked a real versatile centre midfielder. The boy has energy to burn and has done very well since coming in. Initially I wanted to avoid signing anyone yet but the majority of my midfielders were attack minded and I needed something different.

A host of deadwood left, via loan or permanent deal. We managed to raise £1.5 million between Dedryk Boyata, Nadir Ciftci and Logan Bailly – while reducing the wage budget overall. 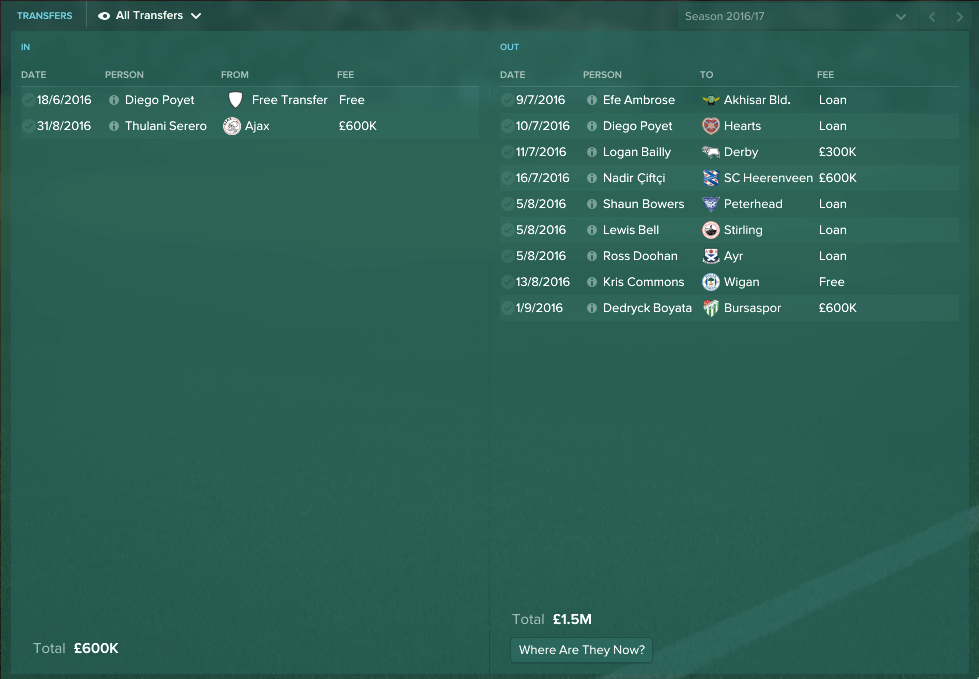 There were too many changes to note them all. I brought in as many members off staff I could and the best available to me. Training has significantly improved and the scouting department expanded. This will be an on-going process the first couple of seasons.

We have 4-5-1 game plan as standard with the following TI’s; close down more, push up higher, retain possession and play out of defence. Player roles and formation are quite fluid as some games we will line up flat or with a defensive midfielder or one of the wingers pushing up with an attacking midfielder. It all comes down to how the opposition line up.

Domestically we are the team to beat. So far only Aberdeen have managed with a narrow 1-0 win up at Pittodrie. We also dropped points away to Ross County and the NYE Glasgow Derby at Ibroke. Highlights so far have been a 4-0 win over Rangers, a spectacular 6-3 win over Aberdeen and coming back from behind twice to beat St. Johnstone 5-2.

The League Cup was wrapped up by November thanks to the new format. We had quite an easy run after a scare with Falkirk taking us to extra time. We eventually won 2-0, the remaining fixtures we won them all 3-0. We are yet to enter the Scottish Cup but my goal for the season is a treble so I will be pulling no punches.

The Champions League was a roller coaster of emotions. We coasted the qualifiers with only Hapoel Be’er Shiva managing to score a single goal against us. Reality set in when we were embarrassed by Dortmund as the strolled to a 6-1 win, we got our dignity back with a draw against Real Madrid to be back in the dumps with a freak loss to Dynamo Kyiv. We turned it around beating both Dortmund and Kyiv back-to-back comfortably. We then almost made it through in what was a tight and very tough group.