First to join in January was Lewis Moult. I needed a 3rd choice forward as I wanted to loan Jack Atchison to get him more games. Moult came in and done a job. He didn’t set the league alight but will do as a cheap back-up option. The great news is that his value has quadrupled – so there is a good profit to be made.

The final singing of the season was John McGinn. He is who I see the long term successor to Scott Brown. He played very well when required and will feature a lot more next season. He was the most expensive signing of the season at £2 million. His singing signalled the end of Nir Bitton’s career at Celtic Park.

There were four players who left permanently. Efe Ambrose was boxed up and sent on a free to Turkey, Doris de Vries also left. Cristian Gamboa and Nit Bitton left for mainland Europe netting us £3.1 million to invest. I promoted young Tony Ralston to replace Gamboa. I recalled Diego Poyet from a poor spell at Hearts and sent him to Genk for the remainder of the season with 500k coming in our direction. Kris Ajer also collected us a similar fee joining Kobenhaven on loan. Ryan Christie also went out with a host of youngsters to get more game time. 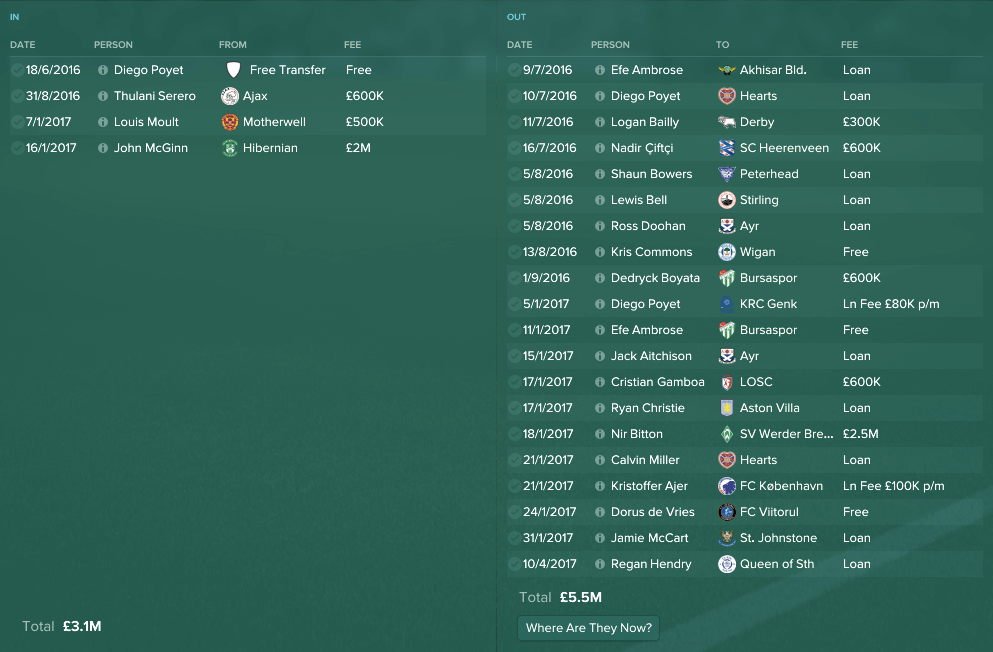 Incredibly we didn’t draw a single game the full second half of the season but lost four. We scored 88 goals this season and racked up an incredible 95 points and in the process won every single home game this season. Our goal difference was almost 4x that of 2nd place. The highlight of the second half of the season was putting 5 past Rangers and then back-to-back 3-0 wins in the final two fixtures with almost entirely different starting XI’s.

As you know the League Cup was wrapped up in November. We had quite a tough run in the Scottish Cup, Inverness and Hearts made us work for it. The final was more straight forward with a 3-0 win over Rangers.

Plans for the Season Ahead

Looking to the season ahead my main plan is to reduce the numbers as we have a lot of players out on loan. I feel we can make about £3 million in sales and loan fees. There will not be many first team changes, one or two perhaps. Instead I will be identifying a few top talents to loan out, likely to feeder club Huddersfield.

We are expected to sell an extra 4000 season tickets this year. That could mean an extra £30k p/w available for wages, not that I intend to use that yet. We are still about £90k p/w under budget beforehand. 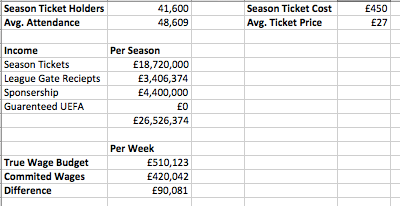 Expectations are high as expected. Can we do back-to-back trebles? Can we crack 100 points or goals? Can we reach the Champions League last 16? Time will tell…